Someone said to us that the Trent-Severn Waterway got even more beautiful, the further up you went. This observation was certainly borne out, as we gained height and the terrain changed from the limestone areas to granite as we moved north and west. The waterway twists and turns through clear, sparkling rivers and lakes, with the locks mainly situated in charming small towns and villages. 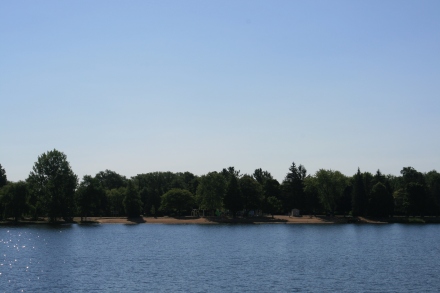 Peterborough is a lively city and as it was a Saturday night, there was a free musicfest concert in the Millennial Park next to the marina. We went along after dinner to find a large crowd of several thousand already enjoying the show. The group, Spoons, had clearly enjoyed the big time in Canada in the 80s, and had a faithful and enthusiastic following, although we had never heard of them and their music, a little disappointingly, wasn’t of our era.

But the next day, on our way back from reconnoitring the famous Peterborough Lift Lock, and a swim at Rogers Cove on Little Lake, we passed the Holiday Inn where a group called Gunslingers were entertaining ageing rockers and dollybirds while they drank their Sunday afternoon beers and cocktails on the patio overlooking the lake. We definitely fitted the demographic and left the bikes outside, had a beer, and even joined in the dancing.

There are two locks at Peterborough, Locks 20 and 21. Lock 21 is the  Peterborough Lift Lock, regarded still as an engineering marvel. Two adjacent holding tanks simultaneously move in opposite directions, to take boats up and down the lock.  No electric power is used and the lock works simply by the weight of water in the upper tank being greater than that of the lower one. The lift is 65 ft – at the time it was built, in 1904, it was the largest structure in the world to be built from unreinforced concrete. It is very quick too – the ascent took only a couple of minutes.

Peterborough Lift lock from the footpath 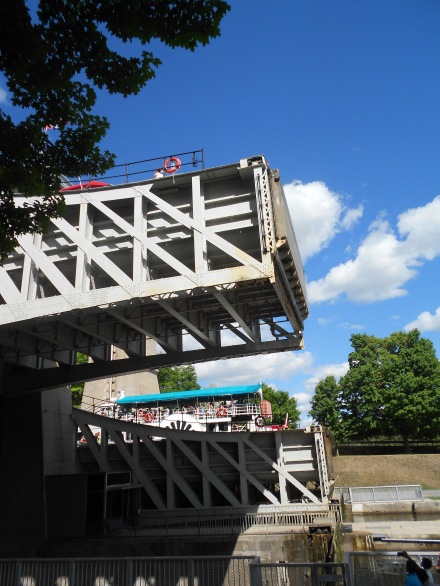 Another view from the footpath

At the top of the Lift Lock 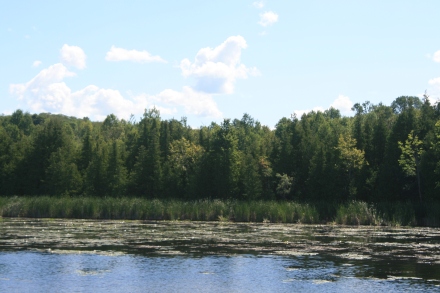 Looking back to Lock 25, Sawer Creek 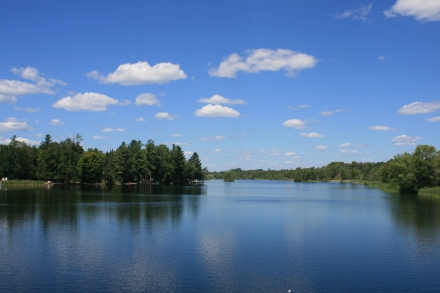 After several more locks, we tied up at Lakefield, and it was so hot we had a swim from the boat in the narrow channel above the lock.

Just above the lock at Lakefield

Lakefield was a pioneer settlement established in the 1820s by Col Strickland, whose two sisters, Catherine Parr Traill and Susanna Moodie later joined him. They were both writers and their books The Backwoods of Canada (1836) and Roughing it in the Bush (1852) sound like interesting reading. Many old houses remain. 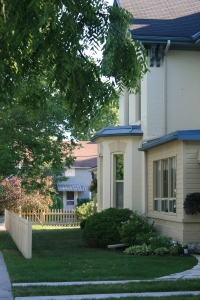 This house was built by JC Sherin and was owned by the family until the 1980s.

We decided to eat at the Canoe and Paddle, a British-owned pub, despite usually avoiding such places when we’re away. The owners had written the menu in a jokey sort of style, presumably to differentiate their clientele from that of their rivals, the Cassis Bistro, which offered ‘gourmet dishes and fine dining’ and which we did not feel quite up to.

We settled on ‘Fingerlickin’ Chicken Curry – England’s national dish!’ and it fell to our charming waitress to regretfully advise us that they had run out of their Madras with coconut sauce, but we could have Red Thai instead. That did not have quite the same appeal, so Ian decided on haddock and chips, and I ordered a Taco Bowl with pulled pork, remembering just in time to pronounce it Tarko and not Tayko, which seems counter-intuitive to a northern British ear. The food, when it came, was very good. 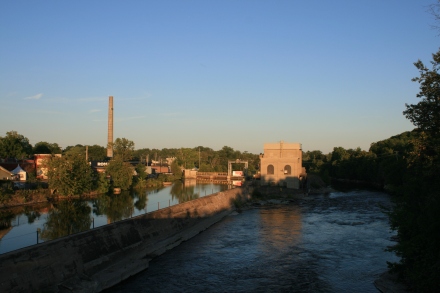 The river at Lakefield in the evening

Another of Lakefield’s claims to fame is that Prince Andrew attended a private school there, and an island in Lake Katchewanooka, just above Lakefield, bears his name. 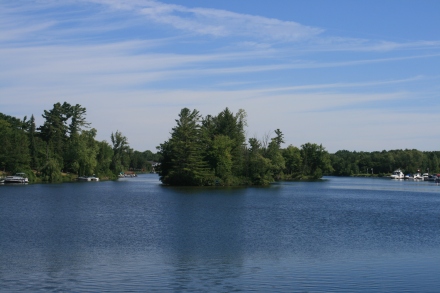 The Kawartha Lakes area is reputedly the most beautiful part of the waterway. Over the next two days we travelled through lakes and rivers of crystal clear water, stopping at Buckhorn Lake and then Fenelon Falls. The area is a popular holiday destination for Canadians, and there are many cottages on the shoreline, but for the most part they are unobtrusive and don’t detract from the loveliness of the scenery. 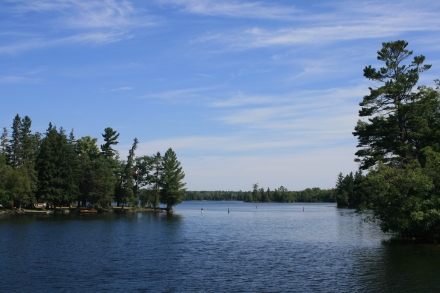 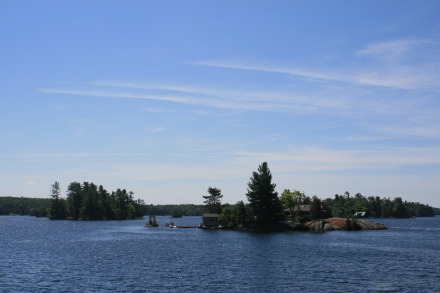 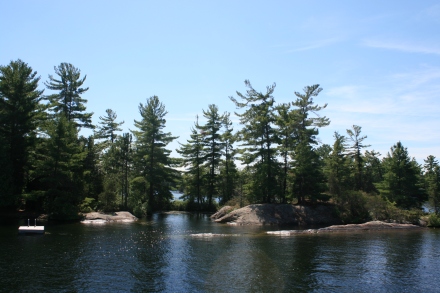 Buckhorn Lake in the morning

Bobcaygeon is a popular place and we had quite an audience at the lock there.

We were lucky to get a space on the lock wall at Fenelon Falls, as that too is a popular place for boaters to overnight. Not only did a boat vacate a space just as we emerged from the lock, but a nice woman from the next boat appeared on the dock to take the mooring rope, which was just as well, as the crew had not been having a very good day. At the previous lock, we had to wait some time for the lock to empty, and the Captain had had to turn the boat round three times in a confined area before the crew succeeded in securing a rope round the bollard, and even then only with the help of a passerby.

The Captain was not best pleased with this display of crew rope-throwing incompetence, but Fenelon Falls had an ice-cream shop which sold the famous Kawartha Lakes Dairy Ice-cream, and a cornet went some way to restoring his good humour.

11 thoughts on “Peterborough to Fenelon Falls”