We spent 3 days in Elizabeth City after our trip across Albemarle Sound, waiting for our visitors (Liz and Nick) to arrive. I cleaned the inside of the boat in readiness – it’s odd how ingrained these rituals are – and Ian decided to include testing the sea-worthiness of the RIB in his list of maintenance jobs. We have hardly used it on this trip, and the angle of the boat as he whizzes round the Pasquotank River gives a clue as to why I’m sometimes a little reluctant to join him. 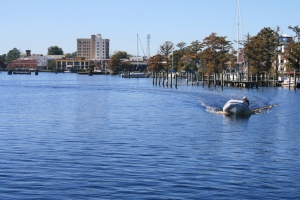 Testing the RIB at Elizabeth City 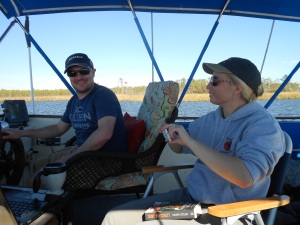 We had the choice of two routes from Elizabeth City to Norfolk, VA, the end-point of this leg of the trip. The Dismal Swamp route had an alluring name, but  consisted of a straight, 50-mile canal. The other more easterly route which we followed, through the Pasquotank River, Albemarle Sound, North River and North Carolina Cut to Coinjock, and then to Pungo Ferry and Norfolk via Great Bridge,  would offer more variety of scene. 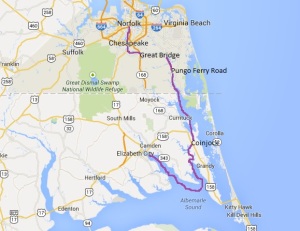 The North River narrowed into the North Carolina Cut as we approached Coinjock. 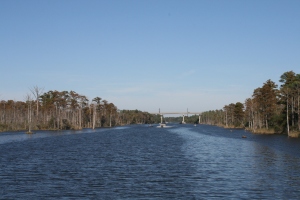 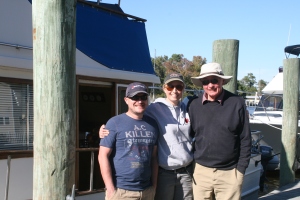 Coinjock Marina was a long, straight dock full with about 20 boats, all except Carina going south. There was an excellent restaurant, and that was full too.

Next morning, we met our first fellow Brit, who was single-handedly  sailing his small yacht  Wind in the Willows, to the Bahamas. It  seemed a suitable name, given that its owner, who looked nearly as old as the barber of Columbia, was an archetypal English gentleman, with a shock of white hair, Queen-Mother teeth, spindly tanned legs and an RP accent. We helped him cast off as he was leaving, and he expressed concern that I might damage my fingernails untying the knots in his mooring ropes.

Later, in the marina office, the dockmaster said to one of the dockhands, ‘Wind in the Willows gone? He forgot to pay.’

Wind in the Willows had been making the journey south, via Coinjock, and back again, every year for the past 24 years. There was some  speculation about his country of origin, but given our accents, the marina staff were being polite. ‘Well, he sure ain’t from anywhere around here.’

The ICW followed the North Carolina Cut north of Coinjock, then opened out into Coinjock Bay, and Currituck Bay, before entering North Landing River just before the Virginia State Line.

We were looking for a sheltered anchorage, as the forecast that night was for wind and rain. The waterways guide had suggested a disused dock at Pungo Ferry Road, but when we got there, the wind was already gusting quite strongly, and rain seemed imminent. The dock looked delapidated, and there was a suspiciously neglected-looking boat already tied up. Perhaps most importantly, there was an uncompromising notice, stating ‘No Mooring’.

We went back to a side creek which was a little more sheltered and tried to drop anchor there, but the anchor just pulled through the silt and dragged. The anchor and chain, covered with thick black mud, had to be hauled back into the boat and a better site found. In shallow water, with the depth alarm constantly going off, this was less than easy, and we made at least five attempts before the Captain was finally satisfied that we wouldn’t drift off into the marshes, and even then we had to put both anchors out, and Ian and Nick went out in the RIB with a rope to secure us to a handy tree.

Carina has proved she’s more than capable of accommodating visitors, and it was great to find the breakfast dishes washed, or the mooring ropes stowed away, and the fenders taken in. But where Nick really excelled himself was in dropping the mud-covered anchor and pulling it up again six times at Pungo Ferry Road, with uncomplaining equanimity.

However, it was a nice mooring once the stress had dissipated, but it was perhaps just as well that we had not forgotten to replenish the beer supplies back at the marina. 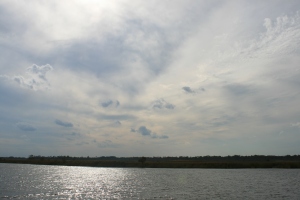 Dramatic sky at our mooring near Pungo Ferry

Ian and Nick securing the boat

Evening reflections at the mooring 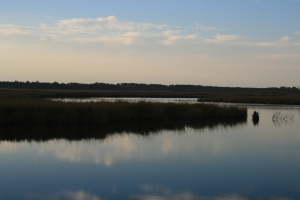 The winding North Landing River continued up to the Centerville Waterway, which linked to the Elizabeth River. 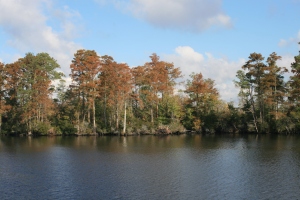 All along the waterway   in North Carolina and now Virginia, we’ve seen lots of Cypress knees. These aren’t, as they might appear, the stumps of dead trees, but a living part of the root system of the cypress tree. Their function is a subject of debate amongst botanists. One popular suggestion was that they help to aerate the root system in brackish water, but this isn’t supported by evidence. 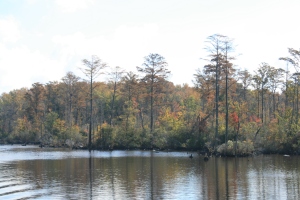 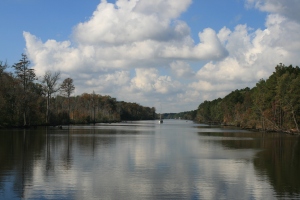 There were several obstacles in the form of bridges which only opened at certain times, and the only locks on the ICW, at Great Bridge, so there was some waiting around. 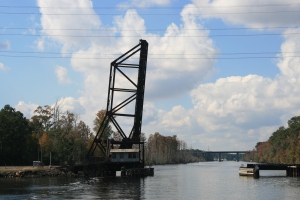 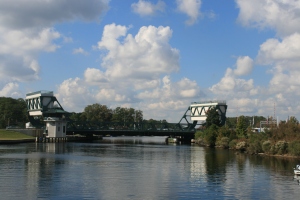 And, for something completely different, the new South Norfolk Jordan Bridge, curving elegantly over the Elizabeth River.

The approach to Norfolk was spectacular. It’s a real city, and the home of a large US Naval Base, and the cranes, ships and  skyscrapers made a sharp but beautiful contrast to the gentility of Savannah and Charleston, and the rural landscapes we’ve seen so far. 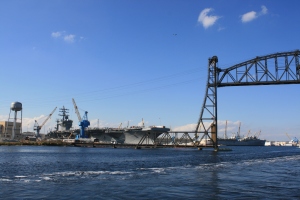 USS Eisenhower at Norfolk Naval Base 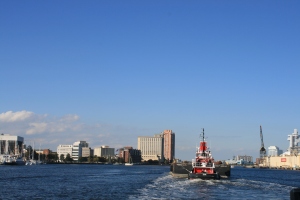 Coming in to Norfolk 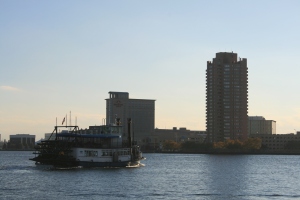 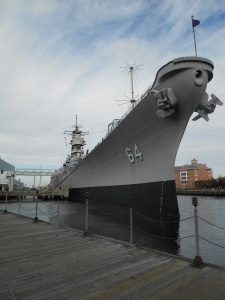 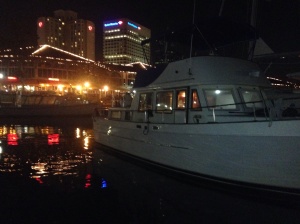 We asked the dockmaster where we should go to eat American food. Hell’s Kitchen on Granby Street, he said. It seemed an appropriate choice for Hallowe’en. It was full of young people and the food was great.

The next day, I mentioned to the dockmaster that we’d been there and liked it. “Yeah,’ said another man who was listening. ‘Y’all just need to get a few tattoos and you’d fit right in!’. He was right about some of the staff and the clientele, but we were still made to feel welcome.

The following day, Liz and  Nick went home, and we took Carina back up the Elizabeth River to the Atlantic Boatyard at  Great Bridge, where she’s staying over the winter.

And we’re looking forward to exploring Norfolk properly when we come back next Spring.