Being back in New Orleans felt good. We knew where we were going.

We didn’t have to do that thing of wandering around a strange city, furtively glancing at Google maps on our  smartphones, trying not to look like tourists, not knowing whether we were walking east or west and suddenly being surprised at the appearance of a famous landmark or geographical feature where we least expected them. On our first trip, I’d been confidently walking towards what I imagined was Lake Ponchartrain, only to find that the expanse of water  I was looking at was actually the Mississippi River.

The Hotel St Pierre, where we stayed in November, had sadly moved itself out of our price range. So instead, we stayed at the French Market Inn on Decatur Street.  It was nice enough and the staff friendly, but it wasn’t in quite the same class as the Hotel  St Pierre.

Before dropping us off, Kamal, our Lyft driver, had presented me with a string of emerald green New Orleans beads, and recommended the Cafe Beignet for lunch. It was just across the road from the hotel, and as there had been no refreshments on offer on the flight from DC, going there seemed a good plan.

The cafe was busy and crowded, but we got a table and listened to Richard Scott on keyboard. It set the mood nicely.

At the Cafe Beignet 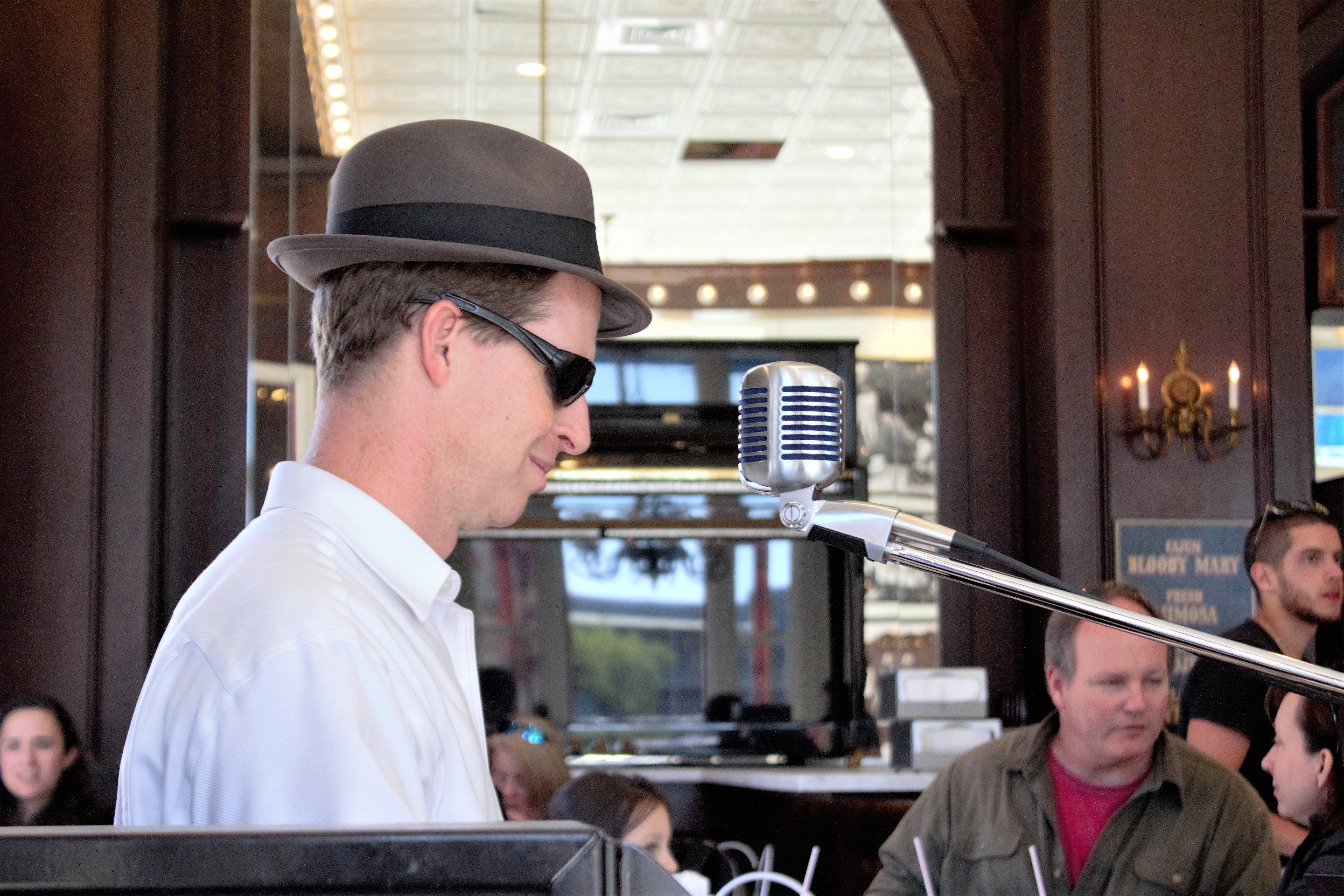 Afterwards we wandered down to the riverfront.

On an impulse, we took the Canal St Ferry across the Mississippi to Algiers Point, one of the oldest parts of New Orleans. We wandered the old streets which, with the church on the green, were a quiet contrast to the bustle and tourist-y feel of the French Quarter.

By this time we craved tea. We passed two promising-looking establishments, but they had both closed at 3 o’clock. We had to have beer instead, at the Old Point Bar, which claims to be the oldest bar in New Orleans. Neither the interior nor the exterior appeared to have undergone much up-dating, but as we were finishing our drinks, some women appeared with trestle tables which they proceeded to set up at one end of the room, with piles of plates, cutlery, several large cooking pots, and some mild disagreement about what should be put where. It turned out that it was Taco Tuesday, and they were obviously expecting a crowd. Apart from the tacos, the scene could have been any village hall in England.

We walked back along the levee towards the ferry point. There had been lots of rainfall and river flooding during the winter and the river level was still very high.

On the recommendation of the lady on the front desk at the hotel, for dinner we went to Coop’s on Decatur St. There was a ‘line’ of several people, and when we finally got a seat, it was a perch at the bar. The food was good, but it was a relief to get away to the Spotted Cat where the Smoking Jazz Club were playing.

The next day we went to the Old Ursuline Convent, founded by French nuns in 1726. In 1824 the convent moved, and the original buildings are now a museum and a wedding venue. But the beautiful chapel is still used as a church.

On the way we had spotted the Cafe Amelie, in a lovely courtyard off Royal St. But we’re still not really in tune with how early Americans seem to eat, and we arrived at 11.45 for lunch, only to be told there would be a half-hour wait for a table. So we went down the road to the rather cheaper Petite Amelie instead.

We had thought about doing a swamp tour. I had always wondered what the bayous were like. But there seemed something a bit perverse about paying a lot of money to go on a boat trip, when you were going to spend the next 8 weeks doing your own boat trip.

Congo Square was where enslaved and free people of colour were allowed to gather on Sundays and play their own music, the roots of New Orleans jazz.

The park turned out to be rather smaller and less interesting than it seemed on the map, so we took an Uber to Audubon Zoo in the Garden District.This turned out to be an inspired choice. The zoo was beautifully landscaped, and one area was a Louisiana swamp.

We took the streetcar back and had dinner at the rather quieter Evangeline Restaurant on Decatur, before going on to the Starlight Lounge where Tuba Skinny were playing.

In the morning we had time for one last walk by the river before leaving for Demopolis. The Cathedral Basilica of St Louis made a stark outline against the cool spring sunshine.

7 thoughts on “Another 48 hours in New Orleans”