When we retired in December 2011, it quickly became apparent that Ian would need some sort of project to fill the long days while I was busy gardening, cooking, reading, playing tennis, walking, doing zumba, visiting the family and going out for lunch with my friends.

He’s always liked dinghy sailing, and for some years we had a share in a narrowboat, so it was perhaps inevitable that the project would involve a boat.

Inspired by Monica and Terry Darlington, who took their narrowboat, The Phyllis May, and their whippet Jim, to the US and wrote about their experiences in Narrow Dog to Indian River, Ian thought we could go one better and do a trip called the Great Loop. He spent a year doing boat-handling courses, navigation courses, communicating with other “Loopers” on an online forum, and looking at numerous “Boats for Sale” websites.

The Great Loop is usually started in Florida. You go up the Intracoastal Waterway along Florida’s east coast, up through Georgia, the Carolinas, Virginia and on to New York, then via the Erie Canal to the Great Lakes, then coming south via the Illinois and Mississippi Rivers to the Gulf of Mexico. Then you cross the Gulf back to Florida. It takes about a year. For several reasons, we decided to do it in bite-sized chunks of two to three months at a time, and store the boat when we weren’t using it.

We arrived in Florida on 7 January 2014, and 3 weeks later mv Carina became our second home.

My kitchen on Carina

We covered the first 500 miles, from Clearwater on the Gulf coast, through the Caloosahatchee River and Lake Okeechobee to the Atlantic coast, and up to Jacksonville where we left the boat for the summer. 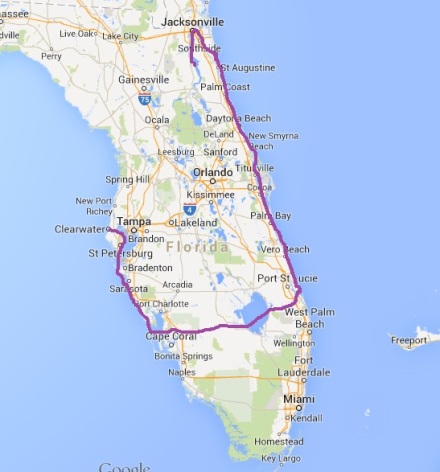 We returned on September 4th and continued our journey through Georgia, South and North Carolina, to Norfolk,Virginia, where we landed at the beginning of November. 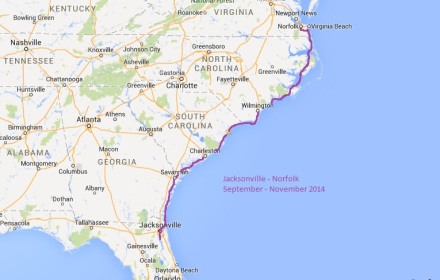 We finished our third trip on Carina in July 2015, and left her at Coeymans Landing Marina, Ravena, a few miles south of Albany in the upper Hudson Valley.

The fourth leg took us through the Erie  Canal to Oswego on the eastern shore of Lake Ontario, and then the Trent Severn Waterway to Georgian Bay on Lake Huron.

We returned to Canada in May 2017 and passed through the North Channel of Lake Huron, down the eastern shore of Lake Michigan, through Chicago and down the Illinois River to Peoria.

Our 6th trip started in Peoria, Illinois. We travelled down down the Illinois River, joined the Mississippi and downstream to the Ohio River. Then up the Ohio River to Paducah, through the beautiful Kentucky Lakes and the Tennessee-Tombigbee Waterway to Demopolis, Alabama.

We returned to Alabama in March 2019, and are on our way to completing our Loop and crossing our wake in St Petersburg, Florida, hopefully before we fly home on May 28th.