The Trent-Severn Waterway has a quite different feel from the Erie Canal. It has a different history too – whereas the Erie Canal was built for a specific purpose, to improve trade for America’s Mid-West, the Trent-Severn was gradually developed over 90 years and not finally completed till 1920, when its potential for providing  hydro-electric power for Ontario was realised. It’s also a great and well-used recreational resource and holiday destination, promoted and marketed as such by Parks Canada who manage it.

Its 240 miles stretch from Trenton on Lake Ontario, to Port Severn on Georgian Bay in Lake Huron, and pass through man-made canals, rivers and lakes, reaching a height of 870 ft above sea-level at the highest point. Unlike the Erie Canal, the locks are all manually operated, but not, as in England, by the boaters themselves.  Each lock is staffed by two or three people, many of them students doing a summer vacation job, but all friendly and helpful. The lock surroundings are well kept, with little gardens and picnic areas, and facilities for boaters to tie up overnight on the lock walls. The lock-keepers phone ahead to the next lock to let them know boaters are on their way, so that the locks are usually ready when you arrive.

After leaving Trenton, the waterway starts off as a wide river, but narrows into a channel as it rises steeply through a series of six locks that are only about a mile apart, so our first morning was quite a busy one. At the first lock we had to tie up and pay for our seasonal one-way permit and for the lock-keeper to give us various tips and information on good places to stay – which lock walls got busy, which had power and so forth. 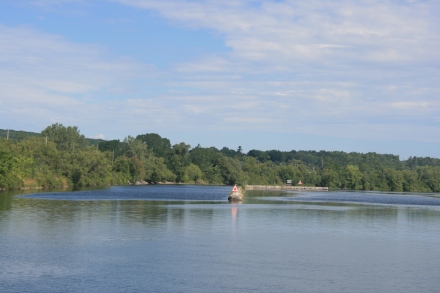 start of the channel leading to Lock 1 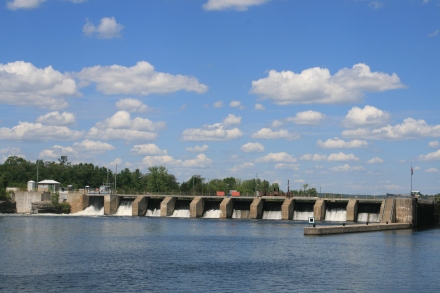 The dam at Lock 4

This dam at Lock 4 was one of the many along the route providing hydro-electric power.

Our first stop was at Frankford at Lock 6, and we had time for a bike ride down an old railway track and a beer at Dimitri’s restaurant, then in the morning had another little treat with breakfast at the Oasis Restaurant. It would never occur to me to go out for breakfast at home, but on the boat it’s pleasant to have an early morning stroll in the sunshine before it gets too hot, and have a sustaining meal before a long cruise.

From Frankford Lock, 8 am

Above Frankford the canal joins the main Trent River and widens out. Our next stop was at Percy Reach, just above Lock 8.

Leaving Frankford Lock behind us 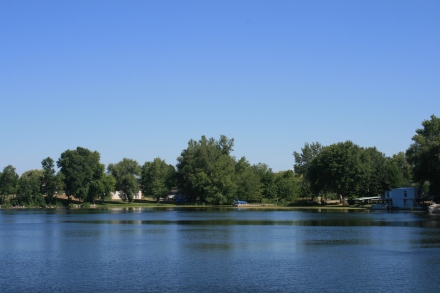 Lock 8 in the evening 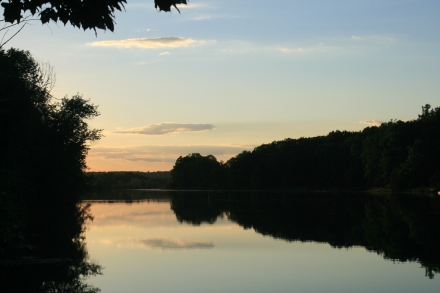 Below Campbellford, there is a deep ravine in the limestone where the Trent River goes into the Ranney Falls. Below the falls, the canal takes a sharp left and goes into locks 11 and 12 – these form a double lock, so that as soon as you emerge from lock 11, you are straight into lock 12 without any intervening ‘pound’. Both the locks are deep, so that from the top there is quite a dramatic view of the surrounding country. 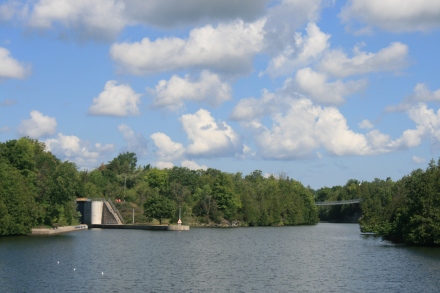 After the lock there was a straight run into Campbellford, where we tied up at the dock wall in Old Mill Park.

The approach to Campbellford above Lock 12

We  took the bikes back down the trail to get a better view of the ravine and falls, which run parallel to the canal and hadn’t been visible from the confines of the locks. The suspension bridge across the gorge was paid for by public subscription and leads to a preserved park area. 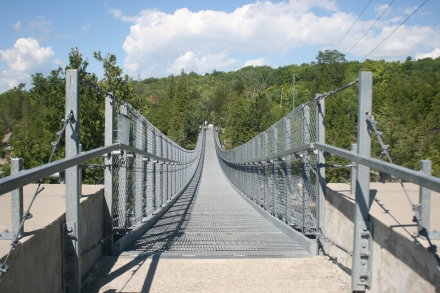 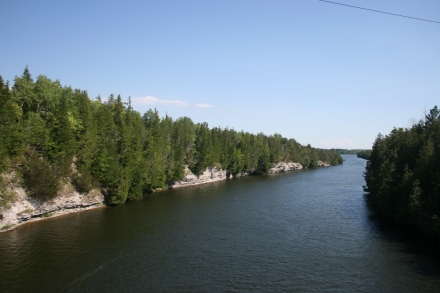 View from the top of Lock 12

The visitor centre next to the dock had a little herb and vegetable garden, and the staff were delighted to share their produce with boaters. So it was omelettes aux fines herbes for dinner, and Greek salad with fresh oregano for lunch the next day.

In the evening, there was another free concert in the park next to the dock – country music this time.

Old Mill Park from the dock, showing the bandstand

Campbellford Downtown from the dock

The next day we intended to anchor out somewhere quiet and peaceful, but it had become so hot that we decided to go all the way to Hastings, so we could stay in a marina with access to a power supply and  be able to  have the air-con on. Wimpish perhaps, but it’s one thing having temperatures of 35C during the day, when you are cruising along in an open boat,  and another trying to sleep at night in a small cabin. On the way, we anchored in the lovely Seymour Lake and had a swim from the boat.

We followed another boat for part of the way and regrettably, the Captain indulged in a little schadenfreude watching the other captain mess up going into one lock, and not realising the lock gate was actually open, causing significant delay, at another. 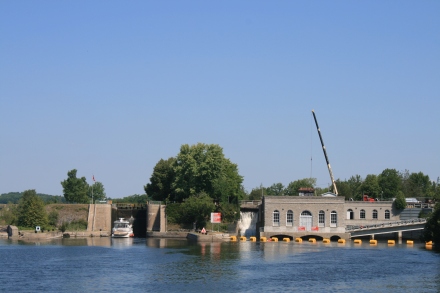 Following Changing Latitudes into the lock. One of the many hydro-electric stations en route

Locks 14 and 15 were another double lock. 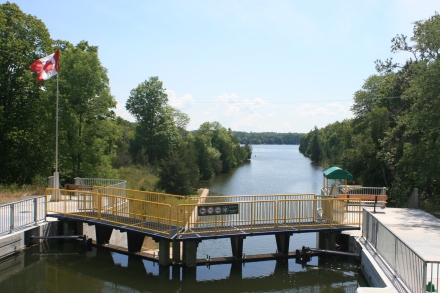 The municipal  marina at Hastings is next to Pisces Park, a community development that was opened only on 30 June, 2016. The vision is ‘to create Pisces Park as a cultural space with a series  of fish sculptures of the types of fish found in the Trent River’ and at present, only the first of these, Pisces Pete, by Canadian artist Bill Lishman,  has been installed. The name was chosen ‘via a community contest’. Shades of Boaty McBoatface, but Pisces Pete certainly has impact.

Between the water’s edge and the mown grass areas, native perennial flowering plants have been sown, both to enhance  the view and the help stop erosion of the river bank. 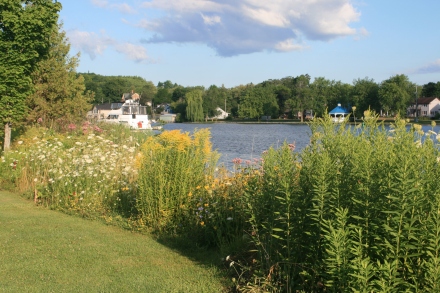 From Hastings, the river widens into Rice Lake, and half-way down the lake the waterway takes a turn right into the Otonabee River, which winds its way to Peterborough. The town is actually on Little Lake, a bulge in the river. 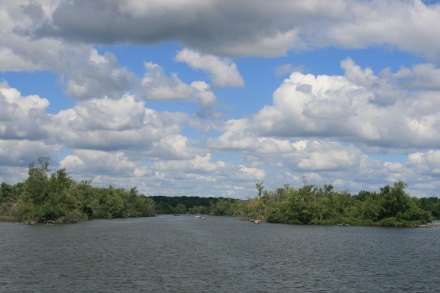 Entrance to the Otonabee River from Rice Lake

The fountain in Little Lake at Peterborough

The Captain got his come-uppance trying to dock at Peterborough, and it was not Carina’s finest hour either. By the time we arrived, there was a strong wind blowing. We were instructed by the marina staff to go to a finger dock, adjacent to another boat, which involved Carina making a sharp 90 degree turn to starboard.

Carina does not do 90 degree turns. She has a single screw engine and no bow thrusters. She stops at 45 degrees and won’t do what she’s told in reverse, either. In strong winds, she goes into toy-throwing mode.

The young marina staff were unfailingly polite, courteous and encouraging, but eventually gave in and let us go on a T-dock, which involved only driving up to somewhere near enough for mooring ropes to be thrown to the waiting dock staff.

Later, morale was restored when we had Rob, Jay and Mary-Jo round for drinks. They are Gold Loopers, which means they’ve done it all before, and we first met them back in Oswego.  They too have a Marine Trader just like Carina. Jay told Ian that he wouldn’t  have even attempted trying to put the boat into a finger dock. Instead, rather than waiting for marina staff to tell him where to dock, he tells them where he wants to go.

We pick up useful snippets all the time.

16 thoughts on “The Trent-Severn Waterway – Trenton to Peterborough”