‘We’re in Canadian waters now,’  said the Captain, as if this would somehow ameliorate the symptoms of acute motion sickness I’d been suffering from ever since we left Oswego Harbour, five hours previously. I said something unsuitable for recording in a blog which one day might be read by my grandchildren.

But after a while, I realised that Carina was not rolling  so violently, and I could see land. And it looked quite pretty.

After we had safely docked, a further olive branch was proffered with the announcement that he would be happy to have salad for tea, to save me the bother of having to cook. By this time I was feeling so much better that I didn’t respond with the barbed retort that in retrospect, might have been deserved.

Prinyers Cove, our first stop in Canada, is a small inlet in the Bay of Quinte, which separates the north shore of Lake Ontario from Prince Edward County.

Ian’s first job was to phone the Canadian Customs with details of the boat, how long we were going to be in Canada, our passport numbers, and how much alcohol we had on board. Canada is quite strict about alcohol, which can be purchased only at Beer Stores or LCBOs, outlets of the Liquor Control Board of Ontario, forbidding, windowless places that appear not to invite custom. I couldn’t help wondering whether alcohol-related crime in the UK might not be reduced, if we placed similar restrictions on where alcohol could be bought.

Prinyers Cove was a delightful haven after the horrors of Lake Ontario, and on our first full day in Canada we travelled only a few miles to an anchorage near Adoplhus.

There was a sandy beach nearby, part of a national park, and we took the dinghy across to the public jetty and had a swim.

The beach at Adolphus 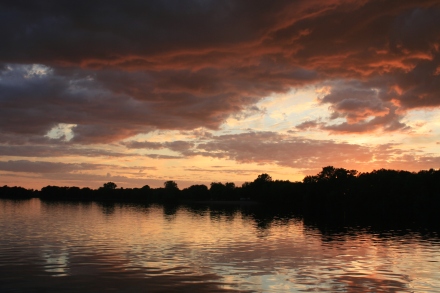 Sunset from the mooring at Adolphus

We passed through the Bay of Quinte, where there appeared to be some sort of power-boat racing going on. 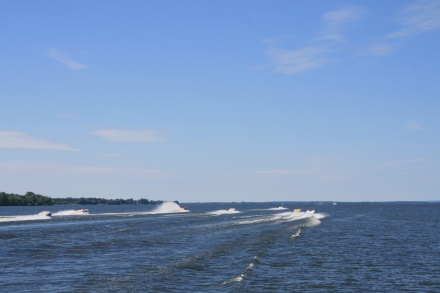 Racing in the Bay of Quinte

We had two nights at the well-appointed and very well organised Trent Port Marina. 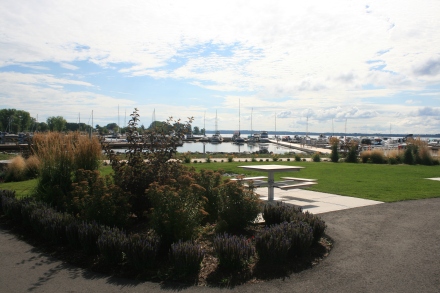 We dined at Tomasso’s , a family-run restaurant in an old building on the Trenton riverfront. It was our first meal out in Canada and more than met expectations.

A family (new baby, Mama, Daddy, uncle and aunt and two sets of grandparents) came and sat on a table next to us. Shortly afterwards our waitress brought them a tray containing several tall glasses of a murky brown liquid, garnished with what appeared to be sticks of celery.

I couldn’t resist asking our waitress what the drink was.

It wasn’t an I’ll-have-what-they’re-having situation. When we got home, I consulted Mr Google. The drink was invented in Calgary in 1969 by Walter Schell, and quickly became very popular. Apparently, 350 million Caesars are consumed each year in Canada. Oddly, it is almost unknown anywhere else.

The Captain is sometimes not safe to be let out by himself. The next day he went off on his bike in search of a hardware store, to buy an extension for his socket set. He called in at the LCBO too, to replenish our dwindling supplies of beer and wine, and thought a can of Bloody Caesar would be a good idea.

At the time of writing, it’s still in the fridge waiting for someone to be brave enough to try it.

We left Trenton the next day to start the next stage of the loop, the 240-mile passage through the Trent-Severn Waterway, a series of canals, rivers and lakes which link Trenton in the southeast with Georgian Bay in the northwest. 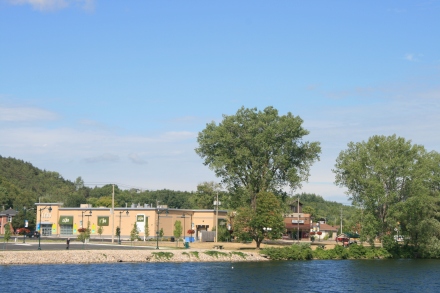 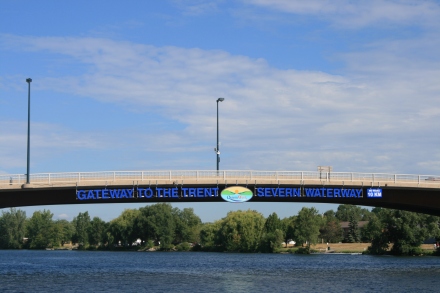 It promised an interesting journey through the beautiful hills and forests of this part of Ontario.