Ewell Town, Smith Island, MD, looked quite inviting as we approached, with the houses among the trees looking out over the water. But after the friendly and welcoming atmosphere on Tangier Island, Smith Island was almost spookily quiet, and something of a disappointment. I was glad we’d gone to Tangier first. 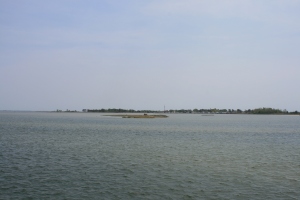 We got a good view of Martin National Wildlife Reserve, just before arriving at Ewell. 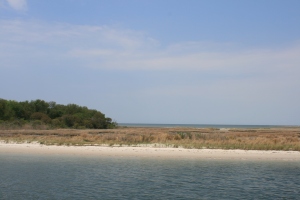 We stopped at the marina at Ewell, on the north shore of the island, but hadn’t been able to contact the dockmaster before we got there.  So there was no-one to greet us, or more importantly, help us to dock the boat.

It fell to me, as crew, to lasso one of the large vertical poles at the side of the jetty, and secure the boat. I was a little nervous.

The Captain’s orders were to get everything ready for a starboard tie. I managed to get two fenders in place, and the mooring rope on the starboard side ready to ensnare the post.

We glided smoothly into the dock.

‘Midline on port!’ came the order from above.

‘I changed my mind!’

I dashed round to the port side, quickly released the port mid-line and, miraculously, managed to throw the rope over the pole and  pull Carina in. Only the Captain heard me swear.

The Guidebook promised two restaurants, a grocery and deli, and the Smith Island Cake Company, the prospect of which had Ian quite excited. Smith Island Cake is Maryland’s State Cake (allegedly) and is a confection of ten layers of sponge cake, sandwiched together with frosting.

But none of these establishments were open, so our plans to eat out had to be shelved. Eating in wasn’t an inviting prospect, either. Carina’s cupboards were relatively bare, but a lady we met in our search for the grocery/deli told us that there was a small store attached to the fuel dock. This turned out to stock a variety of tinned and packaged goods, but nothing fresh. Apparently the locals survive by taking the ferry to Crisfield, 10 miles away, and  do their shopping there.  We bought a can of Bush’s Authentic Baked Beans, and dinner was a humble affair of a plain omelette, Anna potatoes and baked beans, followed by our last remaining orange for dessert.

Fortunately, the next day the weather was favourable enough to cross the bay back to the Western Shore, where we had arranged to meet the family at Solomons. Solomons is a great boating centre and weekend get-away destination for people from Baltimore, Annapolis and DC, so there were plenty of marinas to choose from. We stayed at Solomons Harbor Marina, next to the Holiday Inn, where Ted, Danielle, Sophie and Ewan were due to arrive the next day.

View from our mooring at Solomons Harbor Marina

After the rather spare meal of the previous evening, we felt we deserved a treat, so we got the bikes out and pedalled off to Solomons Island, separated from the mainland by a short bridge over a little creek. But before we got there, we came upon the CD Cafe, somewhat surprisingly situated in a modern building which also housed a dentist’s office, a lawyer and a medical therapist.

We’d read favourable reviews of the CD Cafe and had had enough pedalling, so decided to go in. The restaurant was packed and had a great atmosphere, but we got a table and the food was so good that we went back again three nights later, to round off our visit to Solomons in style.

Our visitors arrived promptly the next day and the two smaller ones quickly discovered what fun it was to go out of the starboard cabin door, run round the foredeck, and re-enter the cabin via the port door. Alternatively, you could exit the port door, run round the rear deck, and come back in via the starboard door. And then there were those little flights of stairs leading down to the bedrooms, and up to the top deck, where you were really high up, and  Grandad had his special instruments. It was great to have you on board, little guys!

(And you, Ted and Danielle!)

It was quite choppy in the Patuxent River so we cruised round the calmer waters  of Mill Creek to anchor and have lunch. Although the area is quite developed, the houses are mainly hidden in the dense woodland and so it seems quite unspoiled.

After dinner at Ruddy Duck’s, which has its own micro-brewery, we went back down to the island for an ice-cream at Coney’s. Lots of other people had the same idea, and the queue was quite long at the kiosk on the promenade next to the little beach. The atmosphere was almost like an English sea-side town, with lots of children playing on the swings and helter-skelter.

We’ve been much more hampered by the weather on this trip than we were on the Intra-coastal Waterway. Because the bay is so vast, wind speed and wave height have to be closely monitored and any small craft warnings duly heeded. So it wasn’t till Tuesday that we left Solomons, and even then the conditions weren’t suitable for crossing the bay or even going north up the western shore. So we contented ourselves with a side trip up the lovely Patuxent River,  then turning north into St Leonard Creek. We passed Vera’s Beach Bar, where until she died at the age of 92 in 2007, Vera  had apparently entertained her clientele by appearing in a variety of Polynesian costumes.

The rest of the creek was quiet and deserted, and as the high winds persisted, we had another day there.

View from the mooring at St Leonard Creek

We ventured down to the mouth of the creek in the RIB to see if we could land at the Jefferson Patterson Park which we had seen on the way in and which had several walking trails. I’d phoned the Park Ranger and she had said there were no jettties we could use, but we thought we might be able to land on one of the small beaches.

The sight of the waves and the white horses on the Patuxent, where the creek flows into the river, confirmed our decision to stay another night up in the creek. We found a delapidated landing stage and tied the dinghy to a post, and waded through the warm, shallow water to the beach. We could see two parked cars a short distance away, so there was obviously a trail nearby. But the beach was separated from it by  fifteen yards of long grass and shrubs, and bearing in mind the dire warnings we’ve had about ticks and other ‘critters’, and the snake we saw in the dock at Solomons, we didn’t risk fighting our way through.

And anyway, the little beach was a lovely place to stand and stare. 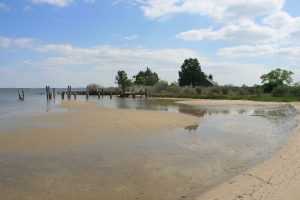 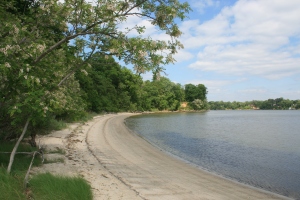 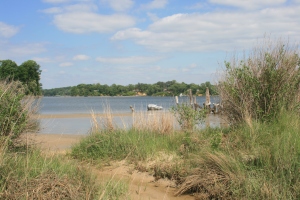 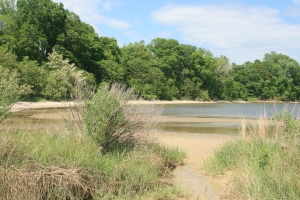 The next day we went back down the Patuxent and crossed the bay again, to Oxford, one of Mayland’s Eastern Shore villages.