Our arrival at Gloucester Point, just across the river from Yorktown, was slightly delayed when, embarrassingly, we ran aground within sight of the York River Yacht Haven, having just advised them that we were about to moor up. Fortunately, it was only half an hour to low tide, so not long after lunch we were afloat again. Lisa, the dockmaster, assured us that ‘everyone’ runs aground not once, but several times, during the course of their boating adventures on the Chesapeake Bay, and how right she was.

Yorktown was founded in 1691 as a port to enable the export of tobacco from Virginia, although the area was explored by Captain John Smith in his exploration of Virginia in 1608. It was also the site, in 1781, of the defeat of the British under Lord Cornwallis by the combined forces of George Washington and the French, led by the Comte de Rochambeau, the final siege and battle of the Revolutionary Wars.  As we approached the village from the York River, the Victory Monument and the schooner Alliance set the scene.

Disinclinitis quickly sets in when it rains continuously for two days, but the York River Yacht Haven had a courtesy car, so we were able to go grocery shopping in comfort, visit a hardware store (Ian is never short of an excuse) and drive over the Coleman Bridge to Yorktown itself, to visit the Watermen’s Museum. Although tobacco was Yorktown’s first industry, eventually the soil became depleted and fishing and crabbing took over as the main source of income. The term ‘watermen’ to describe the families whose generations made a living on the waters of the Chesapeake Bay is taken from the Watermen of the Thames barges.

On Saturday the weather was bright and sunny, so we crossed the river to Yorktown itself and moored at the town dock, got the bikes out and rode along the waterfront past Cornwallis Cove, and the caves in the bluff where Lord Cornwallis hid out in the last days of the Siege of Yorktown, and up the hill to the Victory Monument.

Caves under the bluff

Tobacco Road – where the tobacco was transported down to the docks 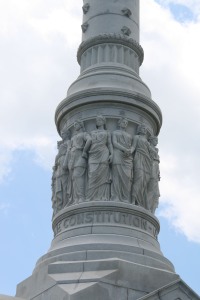 ‘One Country One Constitution’

View of the Bay from the Victory Monument

Yorktown is unspoiled and has many old houses and a lovely village atmosphere.

In the afternoon, there was a BBQ and Blues Festival on the waterfront, and we took that in too. $30  a head admission seemed a bit steep, until we realised that the price included  a half-pint glass, with a 2 fl oz marker on the side. You could go to any of the many craft beer tents and get a free 2 fl oz sample of their beers.

The music was good too, and we particularly liked Bobby ‘Blackhat’ Walters’ style.

At the Blues Festival, Yorktown

Bobby ‘Blackhat’ Walters and the band

The town certainly works hard at attracting visitors and enticing them to spend money. After the Blues festival ended at 6pm, the stalls and gazebos were quickly dismantled. Next morning, they were being re-erected for an Arts and Crafts Fair.

We went to have a look round and Ian’s attention was drawn to Steven Rodrig’s stall. He uses printed circuit boards to make sculptures and we both liked a glistening, blue-green pineapple – we now have the problem of transporting it safely back to England. I had liked it for itself, but also because the pineapple is the symbol of welcome and hospitality in Virginia. And creating works of art out of things that would otherwise go to landfill seems a good idea too.

Unlike  Florida, on Sundays in Chesapeake Bay the waters are quiet and we saw very few other boats as we made our way north towards Deltaville. Or perhaps it’s simply that the season here hasn’t really started yet – at most places we’ve been the only visitors in the marina.

We’d entered the Piankatank River and were just turning into Jackson Creek where we intended to drop anchor, when Carina gave a now-familiar thud. After ten  minutes of reversing and wiggling, the Captain gave up and phoned TowBoat US. After all, we do have Gold Membership and he wears the BoatUS cap. Clearly, we now have the T-shirt too.

The TowBoatUS chaps were kind, professional and completely non-judgemental, commiserating on the trickiness of finding the channels in the creeks and expressing interest in our trip. After half an hour we were free, and a short time later safely anchored for the night. 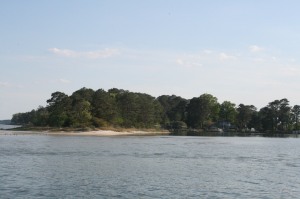 TowBoatUS disappearing back to Deltaville 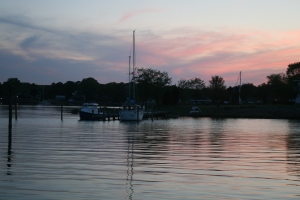 Full Moon on the Piankatank River

The next day the Captain proceeded with extreme caution through the channel, but even so, at one point there was a suspicious-sounding bump, just before the depth sounder peeped. This time though, he was in time to avert disaster and after a quick gear change into reverse and some hasty manipulation of the steering wheel, we were safely on our way to Tangier Island, thirty miles to the east of us across the bay. 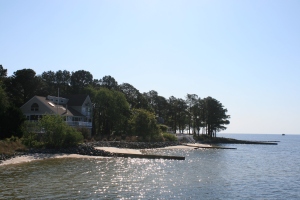 I’m still finding it hard to appreciate the size and scale of the Chesapeake Bay. On a map of North America, it looks like a moderate-sized inlet. The reality is that it’s 170 miles long, and you can’t see from the Western shore to the Eastern one. From Deltaville, crossing to Tangier Island was further than crossing the English Channel from Dover to Calais.

But it was worth the effort. We passed Stingray Point, where Captain John Smith was injured by the eponymous fish and had to interrupt his voyage round Chesapeake Bay in 1608. Although he landed at Tangier Island, it wasn’t settled until 1670.

Tangier was used by the British as a base during the war of 1812, when they unsuccessfully attacked Baltimore and Fort McHenry,  which inspired Francis Scott Key to write the Star-Spangled Banner,  after he witnessed the bombardment there.

The island was also a refuge for escaped slaves, who as free men were relocated to Nova Scotia, Bermuda or Trinidad.

There are 3 main families on the island, the Crocketts, the Pruitts and the Parks, and they speak a dialect that is said to be related to Elizabethan English. At least to my untrained ear, they sounded more like inhabitants of Norfolk, England, than Norfolk, Virginia.

View from the marina

Mr Milton Parks, the owner of Parks Marina, met us and helped us dock. He told us he was 84, but emended this to 83, as he will actually be 84 in July. We were his first visitors this season, and were given a warm welcome. Sadly, of the several restaurants on the island, only one, Lorraine’s Seafood Restaurant, was open, but the crabcakes were delicious so it didn’t really matter that  everywhere else was shut.

The population of the island is declining, although both the Federal Government and the Commonwealth of Virginia are supporting measures to encourage and preserve the island way of life. There’s a school, an airstrip and a new Health Centre. We met a couple of people who had chosen to retire to the island – Joe, a shoe-repairer from upstate New York, and Linda from Florida, who had boated in Chesapeake Bay for years with her husband before coming to live there permanently.

Ian and Linda had a conversation about hurricanes.

There are no cars on Tangier – people get round on buggies and motorbikes, so our bikes proved very suitable for going through the little town and across the marshes to the beach. 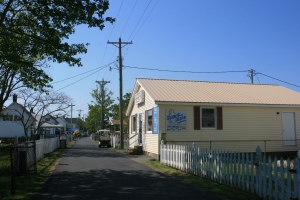 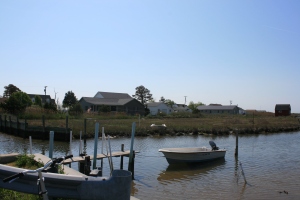 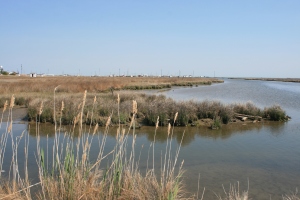 The history of the island is beautifully summarised on the Welcome Board which you pass on the way from the dock to the Main Street.

In many ways, Tangier Island is hallowed ground. Here lie the remains of some of the native Americans who were banished here or used Tangier as hunting grounds. Here lie many of the sons and daughters of Tangier who so bravely served their country in the Armed Forces. Here rest the remains of British soldiers and sailors who dutifully served their country during the war of 1812. Here is what remains of the soil upon which those African Americans first walked as free people. 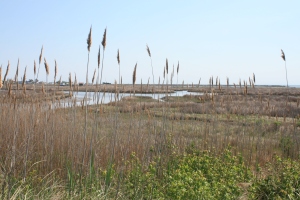 As we returned to the boat from the beach, we saw the Tangier Island Fire Truck, blue lights flashing, making its way slowly down the narrow lane. A young woman was in labour. We knew this from another woman in her front yard, hollering to her friend a few doors down. A helicopter of the Maryland State Troopers was waiting on the airstrip, to take the young woman to the mainland.

The next day, the Captain made a faultless exit from Parks Marina, and  we travelled 24 miles north, to Smith Island, Maryland.

5 thoughts on “Things that go Bump……..Yorktown to Tangier Island”