….but you can have too much of a good thing, and the for the last two days the temperature has been up to 30C and a following wind has meant it’s been quite uncomfortable up on the flybridge. Fortunately the nights have been cooler, as the airconditioner on Carina’s pretty noisy. When we bought Carina, Tom and Tracy were plugging the benefits of the ice-making machine, something which it would never have occurred to us to think of buying for ourselves. We’re just beginning to appreciate it.

We left Ft Myers two days ago, heading east up the Caloosahatchee River to LaBelle. We’re not in uncharted waters – perish the thought – but it feels like unknown territory, since nothing between Fort Myers on the west coast, and Port St Lucie on the east, features in that bible for travellers, the Lonely Planet Guide. 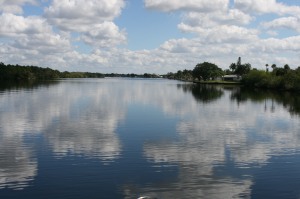 Clouds reflected in the water just east of Fort Myers

The landscape began to change, but there was still plenty of birdlife around.

Some interesting engineering too. This is a bascule bridge.

The vegetation still quite tropical here.

We saw some orange groves too.

Yesterday we covered LaBelle to Clewiston. The scenery and vegetation became more open grassland and we occasionally saw cows at the water’s edge. Presumably the alligators hold no fears for them.

There were locks to contend with, something we are used to on the canals, but these were rather different, being a great deal larger, and manned. There was some anxiety that we wouldn’t know the local code of practice, and also that there might be a lot of surging when the lock filled, but we acquitted ourselves quite well.

We saw a working boat leaving the next lock.

Last night we stayed at Roland Martin Marina, Clewiston. After a few nights moored out, well away from other boats, it was a pleasure to eat at the restaurant there – good food, busy with people and funky music too.

Enjoying a glass of Pinot Grigio at Roland Martin’s

This morning, my usual routine of lying in bed for some time with a cup of tea, checking my emails and Facebooking on my phone had to be sacrificed in the interests of crossing Lake Okeechobee before the wind got too strong. We had, of course, read all about the lake and the vagaries of the weather in Terry Darlington‘s book Narrow Dog to Indian River, which was the inspiration for this trip, and it had assumed totemic significance. It’s an enormous lake – 35 miles across – so crossing it is rather different from meandering up the river. or hugging the coastline between the Keys. How to strike a balance between safety but not wimping out? The forecast was not that good for today – winds of up to 15 knots, moderately choppy, and deteriorating later in the afternoon.But the forecast for the following two days was worse. While time isn’t an issue, we don’t want it to become one, and we have to be in Jacksonville by March 7th, give or take a day or two. So we really didn’t want to hang about in Clewiston, and I had to get out of bed at 7.15 to be away by 8.
It was a beautiful morning, and almost straight away after leaving the marina we found ourselves in the wide expanse of the lake. 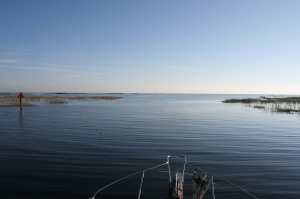 It took us just under four hours to cross the lake, and for the last hour there was appreciable swell. We carried on along the St Lucie Canal for 10 miles to Indiantown. Here’s another one for the engineers.

We made the right decision. At four o’clock the rain started, with thunder and lightning too. Tomorrow gale force winds are expected, so it looks as though I might get a lie-in tomorrow, and Carina might get some deep cleaning.