Things improved after we left Captiva. We became afloat again at about 2.30 in the afternoon on the high tide, and had a good passage in smooth waters with the sun shining, all the way to Sanibel. We were met by the marina owner, Tom, and he and Robert, the chap whose boat we were berthed next to, couldn’t have been more friendly and helpful. The marina is very nicely landscaped with lots of flowering hibiscus, and it has a good restaurant, Gramma Dot’s, where we had a very good fish dinner. In the morning, we got up to find a complimentary newspaper and two blueberry muffins outside the door of the boat. I just love American customer service.

The guide book says that the best way to get round Sanibel is by bike, so despite the fact that I don’t have a very good track record with two-wheeled vehicles, and I hadn’t been on a bicycle for about twenty years, we set off in search of Billy’s Rentals. I normally don’t go anywhere without the appropriate one-inch Ordnance Survey map, but clearly that isn’t possible in the US, and we had only a vague tourist leaflet as an indication of where Billy’s might be, relative to the marina. A helpful fellow boater told us it was ‘about a mile down the road’ but I’m coming to the conclusion that some Americans aren’t very good at judging walking distances, possibly because they don’t walk anywhere very often. (Only joking, American readers!) We walked on for some considerable time, and at least a good two miles, before we found Billy’s.
We needn’t have worried that by the time we got there, the bikes might have all been taken. There were thousands of them, with many different kinds of varying complexity to choose from. As Florida is flat, Ian decided that the simple, no gears, brake-by-pedalling-backwards type would be appropriate for someone of my cycling capabilities.

Our objective was JN ‘Ding’ Darling National Wildlife Refuge, where you can follow a 5-mile trail through the sanctuary. 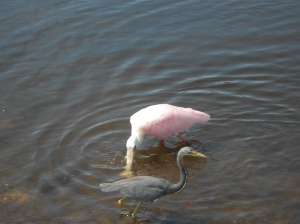 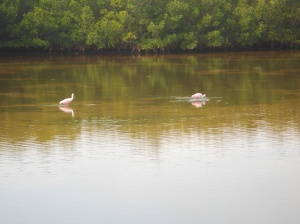 The trail also took us round a midden – debris of shells left by The Calusa Indians who inhabited south-western Florida for thousands of years before the arrival of Europeans in the 16th century.

We had a look at the beach too.

Yesterday we left Sanibel for Fort Myers, on the estuary of the Caloosahatchee River, and saw this trip boat along the way. 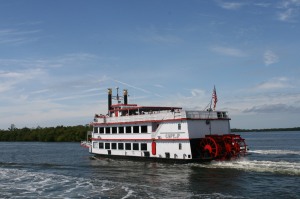 Here’s the view from our mooring at Fort Myers City Marina. 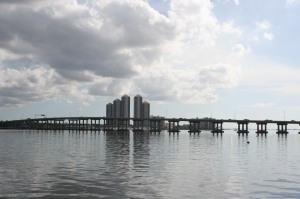 Fort Myers from our mooring