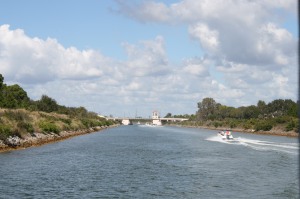 We’ve spent many happy hours on the Birmingham Canal Navigations in nbScallywag, most of them in February in the cold and rain, but sometimes in August in the cold and rain, and I love the sense of history that the old decaying buildings lend to this part of the British Waterways, and marvel at the ingenuity of the men whose inventions and entrepreneurial spirit powered our Industrial Revolution.
The Birmingham Canal Navigations Main Line was built by Thomas Telford and opened in 1838. It’s a wide, straight, majestic canal which is now a haven for wildlife, has several beautiful bridges and was a feat of engineering in its time.
After we passed Venice today, we went through a stretch of man-made channel that fleetingly reminded me of the Main Line, broad, straight and with a towpath each side. But it was swathed in warmth and sunshine, and our sedate progress at 6 knots was frequently interrupted by boy racers in speedboats going six times faster than us, causing Carina to rock and roll alarmingly.
Of course on the British canals, such conduct is considered de trop, and likely to bring other boaters out of the depths of their boats to wave fists or exchange expletives.
But here it seems the norm, so we’ll have to get used to it. And Ian has noticed that many of these boats are adorned with girls wearing bikinis, and he has only a grumpy old woman who doesn’t understand the electrics.

Yesterday we ventured out in the RIB dinghy to get from our mooring to Marina Jack’s in Sarasota. I had imagined that when you stayed on a mooring, it would be a short trip of about 20 yards to the shore. The actualite was a bit different. It was about half a mile, and hair-raising.This is me hanging on for dear life.

Here’s a photo of Carina from the water. 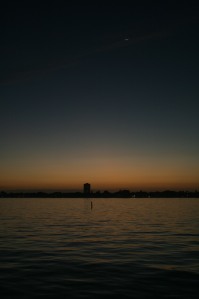 And today, our first taste of what we had envisaged when we thought of doing the Great Loop – calm sparkling water, beautiful scenery and warm sunshine.

There was a slightly sticky moment when Ian belatedly realised that Carina wouldn’t be able to pass under a bridge we were approaching, and had to quickly radio the Bridgemaster and ask for it to be opened.

We’ve seen some rather nice real estate, too.

Lots of small boats out on the Intracoastal Waterway. 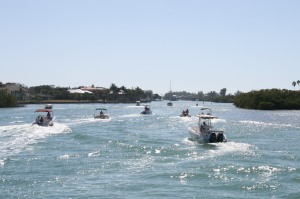 3 thoughts on “Not the BCN”