Leaving St Pete in the rain

I wouldn’t usually use a noun as an adjective, but language evolves, and the word rubbish seems to be in a transitional state, where its use as either a noun or an adjective seems acceptable. I could have used a more literary title for this post, but ‘Rubbish Weather’ seems to convey more accurately both the prevailing meterological conditions, and our feelings on the subject, than something perhaps a little more poetic, like ‘Goodbye St Petersburg’. And for all readers who may be experiencing really rubbish weather back home, feel free to indulge in a little schadenfreude.

We had been aiming to leave St Pete on Wednesday, and that would have been a great trip, with blue skies and calm water. But one or two maintenance issues still had to be sorted out before we could contemplate a night out on a mooring, separated from the facilities of civilisation by a 10 minute ride in the RIB dinghy. So on Wednesday morning, Ian fixed the loo and one or two other things, while I went to the marina laundry and did a bit more cleaning and organising. At this point, a Thursday departure was looking good, but the forecast gradually deteriorated and on Thursday morning, faced with the prospect of rain, winds of 15knots, and a moderately choppy sea, we decided Thursday was a non-starter.

St Pete’s pride and joy seems to be the Salvador Dali Museum, so we duly went along, but with a sense of obligation, and a sense that we shouldn’t waste our time, rather than feeling that it was something we particularly wanted to see.
How wrong we were. 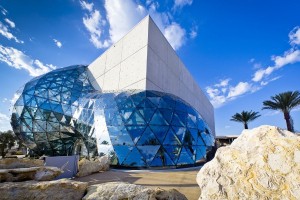 The building itself is impressive, overlooking the bay, and the exhibition comprehensive, illustrating Dali’s changing style and artistic development throughout his long life. What impressed me was the technical brilliance of his work, like The Basket of Bread, painted in 1926 when he was 22.

I couldn’t say the same about the Warhol exhibits which were also being displayed. The Heinz boxes looked like Heinz boxes and the portaits of Mick Jagger and Diana, Princess of Wales, looked as though they could have been done with rather more skill by the average sixth-former. There were self-portaits so numerous that you couldn’t help wondering why this man found himself so endlessly fascinating, or thought that other people would.

This morning, the weather forecast which yesterday had been favourable, had once again got worse, with not only winds of 15 knots and the sea slightly choppy, but rain too.
This time, common sense lost out to an urge to get going whatever, and we left St Pete behind in light rain. No sooner had we emerged from the shelter of the marina than the swell started, which lasted for a good couple of hours while we crossed Tampa Bay. One lesson we have learned today is to Close All Doors Before Setting Off. Luckily nothing was broken or damaged.
We arrived at Sarasota 6 hours after leaving St Pete, but ended on a high note. One problem with these journeys is that at the very end is the stressful business of either tying up to a dock, or lowering your anchor, or mooring on a buoy. (Pronounced boo-ey here in Florida, we learned.) Today it was mooring on a buoy, which meant that the crew had to either throw a rope some distance around it, or grab it with the boat hook. My only previous experience of this procedure was watching Shane Spall’s attempts, on the DVD of her and Tim doing their Round Britain trip in their barge The Princess Matilda. There had been some profanity on the Spall boat, but we managed it at the second attempt with no foul language at all.