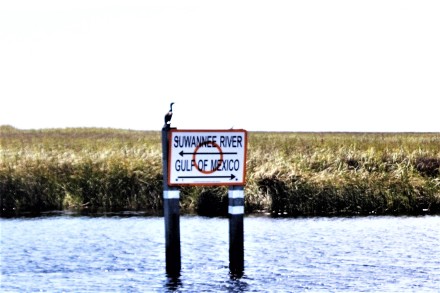 We don’t have radar. We don’t have autopilot. The idea of being awake most of the night, steering the boat though the darkness and sleeping fitfully on the bridge upstairs, followed by a full day of boating, and, in my role as galley slave, trying to provide meals as the journey progressed through possibly harsh conditions, had zero appeal.

It was non-negotiable. Quite apart from the unpleasantness and potential dangers, the way we have done the Loop right from the beginning was to try to see as much as possible of the areas we were travelling through. I wanted to see the Florida coastline and the small towns and villages along the way.

But the most compelling reason was that we had an invitation in Steinhatchee. Our friend Susan’s Aunt Rhoda lived there and had her own private dock, and we had been invited to use it. How could we not?

We had made a head start by anchoring out at Alligator Point, twelve miles east of Carrabelle. We left at dawn, in calm winds and waters.

As soon as we cleared the shelter of Alligator Point though, it got bumpier and we were glad of the prophylactic dramamine we’d taken. The first three hours were rough, but there’s something awesome about being in a small boat, completely out of sight of land, which had only happened a few times on the Loop.

But things calmed down and in the end it was a pleasant cruise into the Steinhatchee Channel.

Ian had phoned Rhoda to let her know what time we’d be arriving and to get instructions about how to find the dock. However much you scrutinise the chart, or Google Maps, it’s never quite so simple in the reality. Rhoda said that her sister was fixing dinner and they’d be waiting for us. We weren’t completely sure, in the uncertainty of a phone conversation with not very good reception, whether this implied a dinner invitation, or just that they would help us dock.

We were getting close to Steinhatchee when an authoritative voice hailed us on the radio.

‘Carina. This is the boatyard at Steinhatchee. You have a reservation with us this evening. Over.’

We looked at each other. Our first thought was that somehow we had messed up, and that we had booked ourselves into a boatyard as well as arranging to stay at Aunt Rhoda’s. Ian assumed his most polite, slightly apologetic, tone.

‘This is Carina. Er……thank you for that….I’m not sure what’s happened here…we do actually have an arrangement to stay with a friend and so….’

‘Carina, that’s correct. You’re staying on my sister-in-law’s dock, we’ll meet you there and you’re expected for dinner with us.’

We’d been a bit slow to realise that the authoritative voice belonged to Jack, Susan’s Dad, and that her Mom, Bobbi, was cooking dinner for us. Jack and Rhoda were there to help us tie up on the dock and Rhoda drove us down to their house, where we had a lovely meal and a great evening with them all, overwhelmed by their generosity and hospitality.

We left Steinhatchee the next morning. Rhoda came down with a flask of coffee for us before we left, and Bobbi and Jack waved us off.

Our next stop was Suwannee, tucked away in a wooded inlet amongst the swamps. We’d seen a lot of dolphins since coming back to Florida, but these two did their special synchronised swimming just for us.

The channel into Suwannee is very shallow and we’d been advised to arrive and leave only on a rising tide, just before high tide. So we couldn’t get away till after lunch the next day but it was a short hop down to an anchorage off Cedar Key.

I had thought that once we reached Steinhatchee, that would be the end of sailing across open water. How wrong I was.

What I had failed to appreciate during the discussions about the route we should take round the Panhandle was that because the coastal waters are so shallow, you have to go several miles out along the channels, into the open water, to get from one point to another. You can’t stay close to the shore, as I had been imagining.

The journey between Cedar Key and Crystal River rivalled the Lake Ontario Experience. Once out of the channel, the waves steadily increased in height and frequency until some of them were getting on for 3 feet. Usually we don’t go out if the waves are bigger than one foot. We were still quite a way from Crystal River, our next stop, and I kept remembering a conversation we’d had with a Gold Looper back on the Trent-Severn in Canada. He had regaled us with the story of how they had been somewhere in the Gulf, when nine foot waves suddenly appeared out of nowhere and without warning. We watched anxiously for any signs of bigger waves coming.

It was a long day. By the time we got into the channel leading to Crystal River, things had calmed down but I felt sick and had a splitting headache.

But the marina where we stayed, Pete’s Pier at Kings Bay, had a golf buggy that we were able to use, and I’d recovered enough to go out that night and we had a good meal at Cajun Jimmy’s Seafood Seller.

The weather continued to be rough the next day and Carina tossed uncomfortably about even tied up on the dock.

But the following day was bright and sunny and we went to Three Sisters Springs, part of the Crystal River National Wildlife Refuge.
The river is fed by springs and because it maintains a constant year-round temperature of 72F, in the winter it is home to manatees, when the waters of the Gulf are too cold for them. As recently as 2010, the land around the springs was scheduled for development and there was a plan to commercially bottle the spring water. But the land was purchased instead by the Florida Community Trust, the City of Crystal River, the US Fish & Wildlife Service, and other non-profit groups and is now owned by the City and the Southwest Florida Water Management District. Public access is limited to allow the manatees their winter refuge. The area has been rewilded with native plants, but there are mown paths and a boardwalk round the springs.

Kayaks and canoes are only allowed in the spring and summer months.

We had an early start the next morning for our next stop, Tarpon Springs.