One has to accept that occasionally, someone might misinterpret the weather forecast, and decide on a course of action that in retrospect, might have been better left for another day.

The hop from Mackinac Island to Mackinaw City only took 90 minutes, but it was deeply unpleasant. The wind whipped up 2 ft waves and combined with the wake from the numerous ferries, caused Carina to pitch and roll very uncomfortably. Logic and reason told me that having survived Lake Ontario, we would probably survive the Straits of Mackinac too, but it was not much comfort and the Captain knew that he was seriously out of favour.

We did some grocery shopping and then, as an indication of true penitence, he suggested that I might like him to accompany me round the shopping mall, which contained the sort of shops that he normally regards with disdain.

In the evening, after a cold grey day, the sun came out and shone on the boats in the marina.

Evening sun on the boats at Mackinaw City

Evening sun on the boats at Mackinaw City

Several people had recommended Charlevoix, 40 miles away, and as the next day was much calmer we decided to press on.

The Mackinac Bridge , just outside Mackinaw City, links the Upper and Lower peninsulas of the State of Michigan, and is known locally as Big Mac. Built in 1957, the bridge is 5 miles long and separates Lake Huron and Lake Michigan. 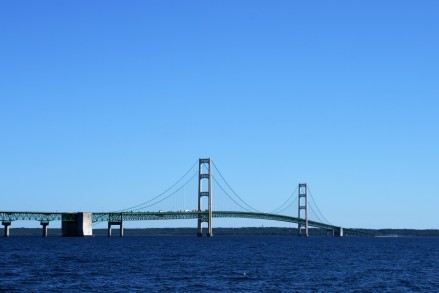 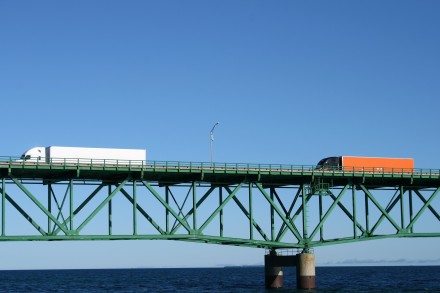 The marina at Charlevoix, and the downtown, actually face Round Lake and to get there you have to pass from Lake Michigan through a narrow channel and a bascule bridge which opens every half-hour.

The community at Charlevoix have gone to a lot of trouble to make the downtown  and the area surrounding the marina very attractive, with landscaped parkland separating the marina and the main street. 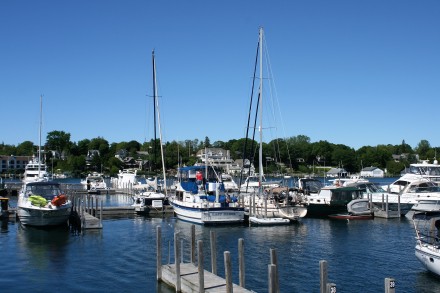 The good weather didn’t last and we woke at 5am to a bright flash and a resounding clap of thunder, followed by torrential rain. In those circumstances, all you can do is get up and make a cup of tea. The rain continued for most of the day, so it was a good day to get the laundry done and catch up with other jobs.

Although we’ve had some beautiful days, overall the weather hasn’t been good this trip. Shorts and sleeveless tops haven’t yet ventured out of the wardrobe, and other things like thermal leggings and fleeces, brought along ‘just in case’ have been in almost constant use. The prize for this year’s Most Useful Garment goes to my Uniqlo Heattech trousers which are comfortable, warm, and cost less than £20.

The next day it was still cloudy, but there was a Farmers’ Market on the waterfront, and the stallholders who sold me things were kind enough to let me practise photography on them. 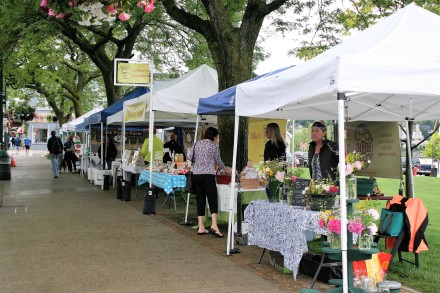 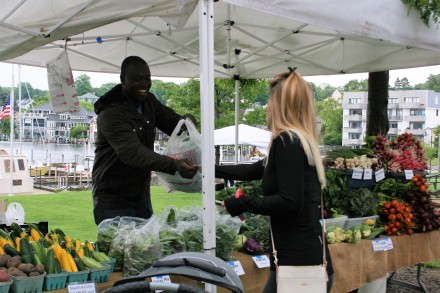 Charlevoix was lively and lit up at night.

On Saturday afternoon, the winds dropped enough for us to move on, but before that we walked through the town to the beach on the shores of Lake Michigan. 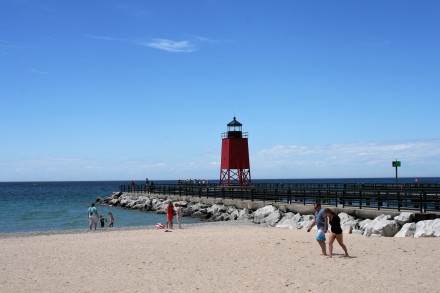