Ian had become increasingly concerned that whenever we went above 5 knots, Carina would make an unwelcome knocking noise. He sought advice on the various online fora that he frequents and the consensus of advice was that there could be a serious problem with the propeller shaft, and the only way to avert disaster was to get it looked at as soon as possible.

The staff at the boatyard at Drummond Island Yacht Haven were clearly very busy getting boats ready for the start of the season, but they kindly made time for us, and after an investigative trip round the bay, they advised lifting Carina out of the water so that a proper diagnosis could be made.  To our relief, there were no serious deficiencies in the prop shaft and the probable cause of the noise a worn cutlass bearing, which could safely be left until we leave Carina for 2 weeks to go to Virginia.

For any fellow  pedants who may be wondering,  there is controversy about the spelling of  ‘propeller’, explained nicely here.

The sky  gradually brightened, but a layer of mist remained. This was a concern, because the Detour Channel forms part of the main shipping route between Lake Michigan, Lake Superior, Lake Huron and Lake Erie. We could hear the foghorns of the big ships without being able to see them, but eventually it cleared enough for us to proceed safely.

We saw  SS James R. Barker several times going back and forth through the lake.

Detour Reef Lighthouse in the haze

We decided to anchor out on the way to Mackinac Island and encountered another difficulty. My patience is sometimes tested when we are looking for somewhere to park the car, and we have to try out several spaces before a suitable one is found. A similar scenario occasionally manifests itself when we are trying to anchor. Apparently, we have the wrong sort of anchor for weedy bottoms, and  on this occasion had five attempts in different locations before the Captain was satisfied that we wouldn’t drift off in the middle of the night. Nice scenery, though.

We crossed to Mackinac Island the next day.  Steeped in history, it has a fort which overlooks the harbour area, and which was built by the British during the Revolutionary War. The  island is both a State Park and a National Historic Landmark.

In 1898 the town took the decision to ban the newly-emergent automobile. The only forms of transport around the island are horse-drawn coaches and bicycles. There’s a small airstrip, but most visitors arrive by boat, either their own, or one of the many ferries that ply the waters between Mackinac and Mackinaw City and St. Ignace. The main street was always busy with people and horses, and if most of the shops, apart from the impressive Doud’s Grocery Store, seemed to sell mainly t-shirts with Mackinac Island emblazoned on them, or several varieties of fudge, it still wasn’t difficult to imagine that the streets and the atmosphere wouldn’t have been very different 100 years ago.

Bicycle St with Fort Mackinac in the background

There hadn’t been much opportunity for gastronomic treats so far, but now we could restore the balance. The Grand Hotel, built in 1887 from Michigan white pine,  claims that its colonial porch is the longest in the world.  Its after-6pm dress code (jacket and tie for men, no ‘slacks’ for women) precluded going there for dinner, but they are more relaxed about their buffet lunch, served every day in the Grand Dining Room.

So we put on our Sunday best and walked the half-mile up the hill for lunch. 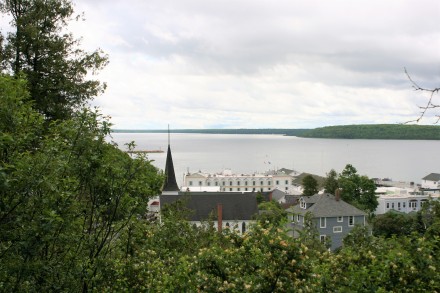 The ticket price included a self-guided tour of the gardens and the hotel (including a small display of American paintings), and lemonade, iced tea and coffee. Alcohol was extra, but we were intoxicated with the grandeur of the surroundings and didn’t need any.  Besides,  we were in America, where it’s quite the thing to have iced tea with your lunch. 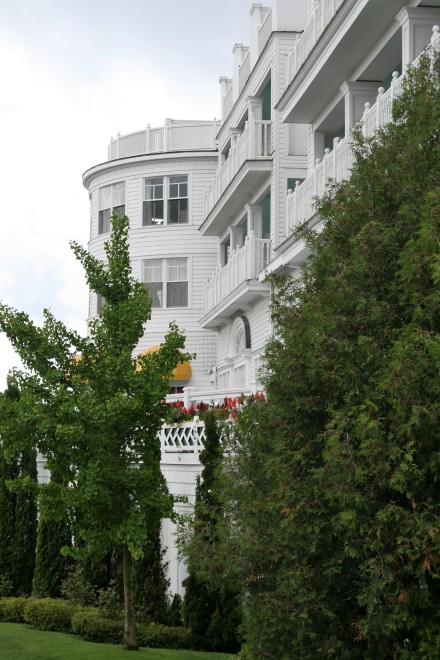 The Grand Hotel from the garden

Ian had phoned to book a table, and was informed that the dining room seated 700 people, so they didn’t take reservations. When we got there the room looked full, but we were seated at a window table overlooking the gardens and the lake. Our server, Michael, told us he was from Jamaica, but had lived in London for several years. He gave us a short discourse on Alan Shearer and other scions of English football. And the food was excellent.

View from our table

The Parlor, the Grand Hotel

Some views as we walked back after lunch. 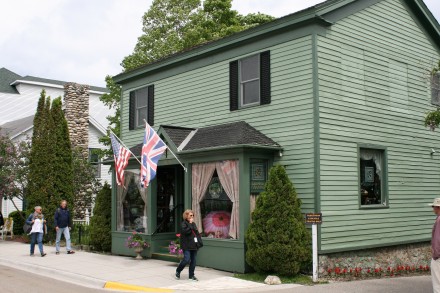 On the way back to the marina we caught the last half-hour of a charity concert being given by the Scottville Clown Community Band in Marquette Park, just below the fort and overlooking the harbour. Their repertoire included the Battle Hymn of the Republic, Basin St Blues and The Stripper, during which two of the band cavorted suggestively amongst the audience, but didn’t actually remove any of their attire. 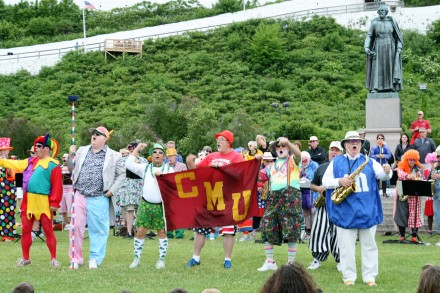 Since its formation in 1903, the band has raised over $300K to provide music scholarships for young people.

The main highway on Mackinac Island is 8 miles long and follows the shore all round the island. Half-way round, there is a small beach called British Landing. Our neighbour in the marina, Dean, was a very experienced boater , having crossed the Atlantic twice, and was a mine of information on both boating and American History. He told us that after the Treaty of Paris in 1783, the Americans had taken control of Fort Mackinac. But during the 1812-14 War, the British, Canadians and Native Americans had combined forces and devised a cunning plan to invade Mackinac Island by landing on the opposite side of the island to the fort, stealing up over the hill, and ambushing the Americans from behind.

As we cycled round the island, there were numerous information boards about the geology, wildlife and history, and we couldn’t help noticing that Dean’s version had been slightly reframed, to the effect that the Americans hadn’t been told the war had started, so just gave in gracefully to the invading forces to avoid bloodshed on both sides. 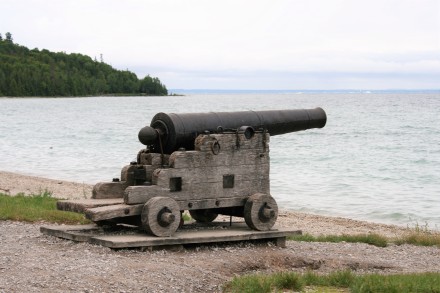 There was a small cafe at British Landing, so we stopped for morning coffee, but passed on their speciality of deep-fried pickles, which sounded only slightly less unappetising than deep-fried Mars bars. 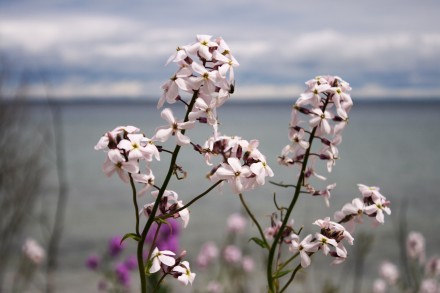 flowers on the beach 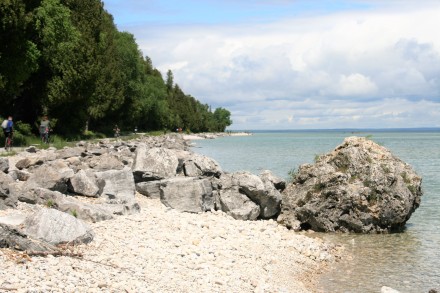 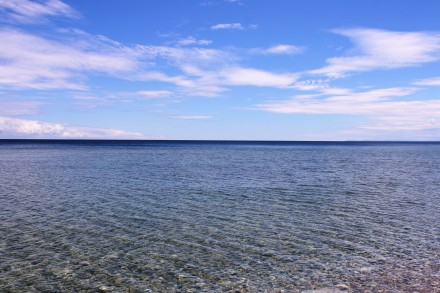 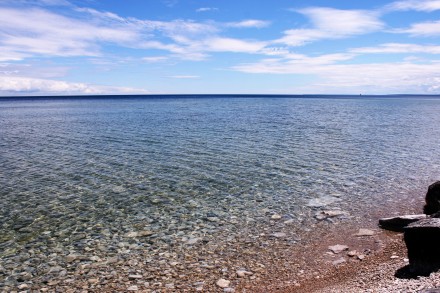