A marina owned and operated by a retired civil engineer had obvious attractions for Ian, which is how we found ourselves staying for three nights at Sue Berry’s dock, a quarter of a mile downstream on the Catskill Creek from  Catskill itself.

We set ourselves a modest target for the end of this year’s trip, finishing at Coeymans Landing, about ten miles south of Albany. This meant we had plenty of time to explore the mid and upper Hudson Valleys, and it turned out to be a good call as the area is so beautiful and different from where we’ve been so far.

We’d left Rondout in glorious sunshine, but storm clouds quickly built up, making  the mountains to the west appear even more dramatic. Unsurprisingly, our first night at Catskill was broken by brilliant flashes of lightning and crashing thunder.

Sue not only owned, maintained and managed the dock, but had built it herself , and rebuilt it twice, after hurricanes Irene and Sandy. Irene had hit the hardest and Sue showed us videos of the devastation and the fast-flowing, swollen creek with unmanned boats careering crazily through the torrent. Now, though, the dock was a lovely peaceful place, with a little flower garden and barbecue area with tables and chairs for boaters to use. 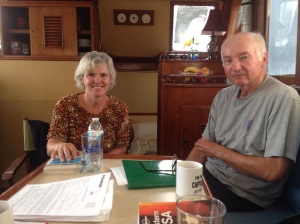 Catskill was the gateway to the Catskill mountains in the early days of tourism in the 19th century, and its steep streets leading off the main street presented quite a challenge when we went out exploring on the bikes. The town was running a Cat competition, rather like the picket fence competition we had seen in Oxford. Local businesses sponsored artists to paint plaster cats about two feet tall which were displayed on posts throughout the town. They will be auctioned later in the year and the proceeds given to charity. 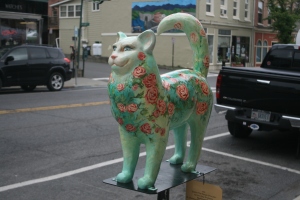 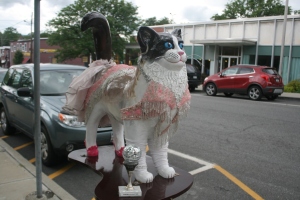 Dancing with the Stars

To see more, look at the Facebook page Cat-n-Around Catskill!

There are lots of lovely old houses in Catskill with unique porches and Sue took us on a guided tour one evening, after she had given us a lift to the Creekside Restaurant at the Hop-o-Nose Marina on the opposite bank of the creek. The food there was excellent, and they gave Ian another glass of merlot free of charge after he had tipped his all over the table. 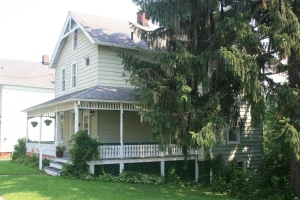 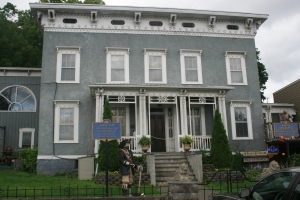 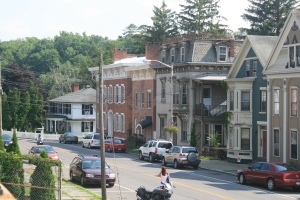 There were several small gardens off the main street. 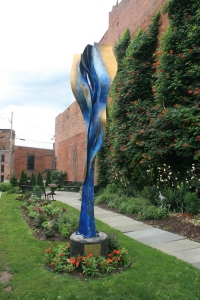 This building was on a street above Main Street, looking towards the mountains. There were no clues to its purpose outside, and we never managed to find out what it was. 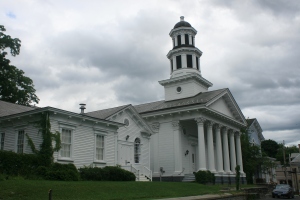 We rode the bikes across the bridge and down to the river bank on the south side of the creek, to the  Ramshorn-Livingston Wildlife Sanctuary, at the point overlooking the Hudson River, and walked to the Observation tower there. 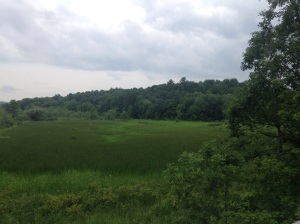 On the way we passed a small family cemetery, for the exclusive use of the descendants of Isaac Dubois, including their husbands and wives. The first interment was that of his wife, in 1793. Isaac himself was descended from Lewis Du Bois (sic) who was born in Lille in 1626. A Huguenot, he fled to America in 1660 and died at Kingston in 1695. 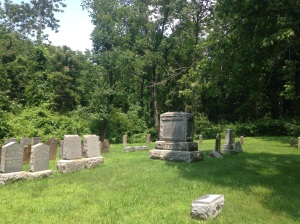 Catskill was the home of Thomas Cole, who is regarded as the father of American Landscape painting and founder of the Hudson River School. Born in Bolton, Lancashire, he came to America as a small child and lived first in Ohio and then New York City. After a visit to Catskill he settled there at Cedar Grove, a lovely house high on the eastern side of Catskill Creek, with fine views over to the mountains. 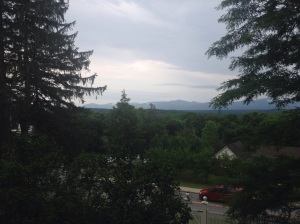 View from Cedar Grove to the Catskills

Cedar Grove now exhibits contemporary art as well as a few pieces by Cole and other artists of the Hudson School.

Cole was self-taught and this is one of his works that is exhibited – a colour wheel that demonstrates the difference between hue, value and chroma.

The work of the Hudson River artists awakened interest in the beauty of the landscape and the tourism industry developed in the area as a result. Thomas Cole deplored the depradations of commerce and deforestation on the landscape, and his work prompted the start of the environmental conservation movement. In his 1836 ‘Essay on American Scenery’ Cole wrote:

“Yet I cannot but express my sorrow that the beauty of such landscapes are quickly passing away – the ravages of the axe are daily increasing – the most noble scenes are made desolate and oftentimes with a wantonness and barbarism scarcely credible in a civilized nation.” 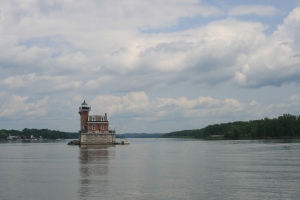 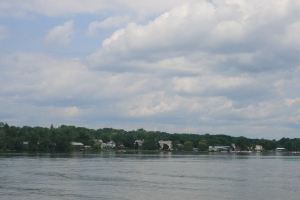 We were moored on the outside dock so had a great view of the 4th July fireworks which were let off from a barge in the middle of the river, with Carina brazenly displaying her Union Jack alongside the American flag. The fireworks were spectacular but it was far from a solemn event, with the marina staff taking a few minutes off from igniting the fireworks every so often, to have another beer. 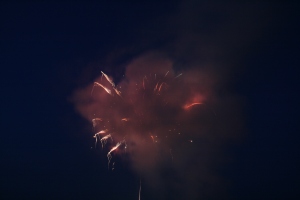 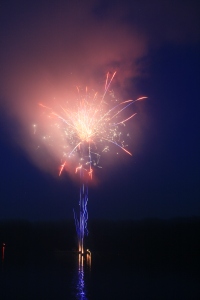 We had a spare day and a hire car, so took a scenic driving tour through the mountains, following in the footsteps of the Hudson River School artists. Above North Lake is the site of the Catskill Mountain House, which in its heyday provided accommodation for artists and tourists who made the journey up from the valley to draw, paint and walk through the hills. After cars replaced horsedrawn vehicles, the hotel declined and was eventually demolished. Now only the foundations remain.

Looking east over the Hudson Valley from the Mountain House

This is the same view which was painted by Frederic Church, Thomas Cole’s pupil. 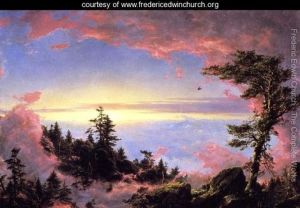 Above the Clouds at Sunrise, Frederic Church

First tints of Fall in a maple sapling 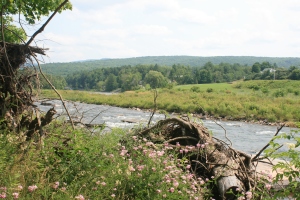 We’ve left Carina in safe hands for the winter at  Coeymans and are spending a few days with the family before flying home. The next leg takes us into the Great Lakes and beyond, and because it’s so far north, we won’t be back until May 2016. I’m looking forward to seeing the English family and friends of course, and eating a nice piece of Stilton cheese, but we’ll miss Carina and America too.