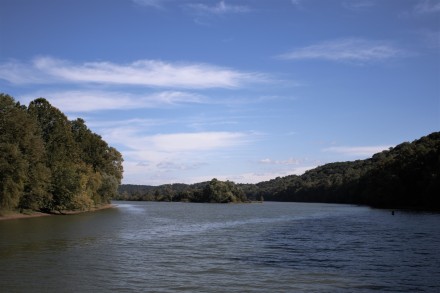 So the take-home message from this week’s blog is, just because you’ve parked your boat safely in a delightful anchorage, the sun is shining, the water is sparkling, there’s no one else around, you’ve had a nice dinner, and no adverse weather conditions are forecast, don’t imagine that adverse weather conditions won’t suddenly materialise when you least expect them, with unfortunate consequences for your boat and yourself.

We had a lovely week with the family. On the way, we had an overnight stop at Wytheville, just over the border in Virginia, but it rained all the way from Wytheville to Haymarket, and disappointingly, our view of the Blue Ridge Mountains was obscured by heavy mist.

But on the way back it was different. Crisp autumn sunshine lit up the tree-covered slopes which were still only just beginning to show their fall colours, in the mountains where Tennessee, Kentucky, North Carolina, West Virginia and Virginia all meet. The Great Smoky Mountains dominated the view as we drove through north-Eastern Tennessee. 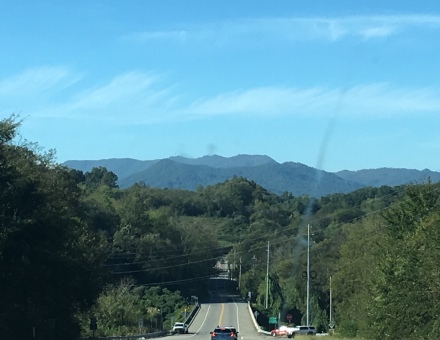 The Great Smoky Mountains from US 321

We stopped at Johnson City and just down the road from the hotel was the intriguingly named Cootie Brown’s Restaurant. The young woman on the front desk couldn’t recommend it personally, but other guests had raved about it.

The exterior was not particularly inviting, looking a bit like a post-war prefab.

Inside, the tables and chairs were painted a bright distressed yellow and were almost fully occupied with people enjoying good home-style food. They didn’t do wine, but the Sam Adams  seemed more appropriate anyway. There wasn’t a frie on the menu and my side consisted of an interesting combination of artichokes, whole bulbs of roasted garlic, roasted red peppers and spinach, garnished with crumbled blue cheese. Another one to try out on our unsuspecting friends when we get home. And our meal wasn’t expensive.

All was well at Paris Landing, but not for long. On the Saturday night we anchored at Rockport Landing, where an oxbow lake forms a sheltered channel away from the main river. We had it all to ourselves. 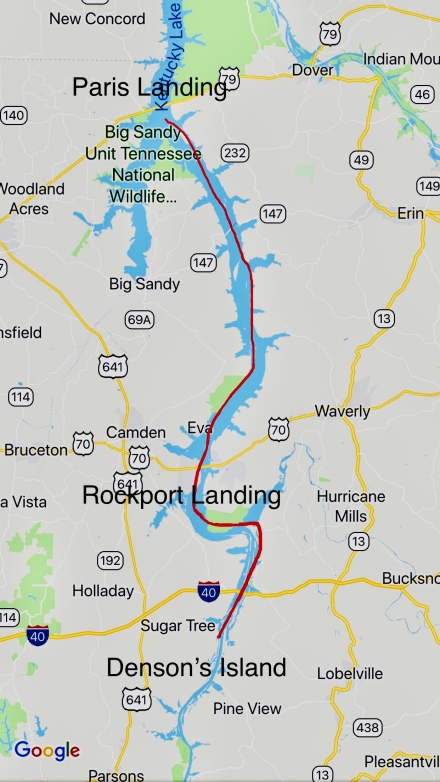 Moderately strong winds were forecast for late afternoon, but they came and went. Frost was forecast for the next morning, but nothing else of note.

The anchorage at Rockport Landing

Around midnight, we were woken by a noise on the deck. Ian went up and secured the little steps that we use to get on and off the boat.

Ten minutes later, a much louder bang had us leaping out of bed and throwing our coats and life jackets on over our pj’s.

Carina was bashing on a channel marker which we didn’t remember being there before, and was dangerously near the rocky shore. It was very cold, very dark, the winds were  strong and howling, and suddenly Carina was being tossed about in waves which had come from nowhere.

The diagnosis was that the anchor had slipped, and it was only then that we remembered the words of wisdom and experience in the Captain Bob Guide, ‘the anchorage is relatively narrow and you may want to set a stern anchor’.

But now it seemed like a good idea. First though, we needed to reverse Carina away from the errant channel marker and to a safer position. Once we’d done that, and it seemed that the bow anchor was firm again, Ian dropped the stern anchor. Unfortunately, in the darkness and the panic, neither of us remembered that the engine was still in gear, and for the second time in a month, we had a rope wrapped round the prop.

The boat was now firmly anchored and there was nothing to be gained by continuing to battle the elements. We went back to bed but found it hard to sleep with the winds howling and the worry of how we were going to extricate ourselves from this particular predicament.

The next day all was calm and the sun shone, though the air was freezing. Ian was out of bed at 6, but I refused to emerge from under the covers. I saw no benefit in tackling the situation before the air had warmed up a bit and we had had breakfast.

Eventually we went out and had a look. The plan was to lower the dinghy and try to reach the rope beneath the prop with the long boat hook, and lift the anchor that way. Miraculously, and after a lot of effort, Ian succeeded and we had the anchor back on the deck. Of course we still had the problem that the rope was entwined round the prop, and we had to get that off somehow.

52 years ago I was Swimming Captain at school. No doubt that was what Ian was thinking of when he mused that actually the water was not that cold and I might like to dive down and take a look. Predictably, this met with a John McEnroe-type response but in the end I gave in, took off my many layers of warm clothing and put my swimmers on.

He was right that the water didn’t feel cold at all. Relative to the air temperature, that is. But although I could feel the rope on the prop, I couldn’t stay under the water long enough to untangle it.

We resorted to cutting the rope as close as we could to the prop. Then we tried the engine. Amazingly, it worked and Carina moved, so we were able to make gentle progress down the river to an anchorage at Denson’s Island. This time, we set the stern anchor. 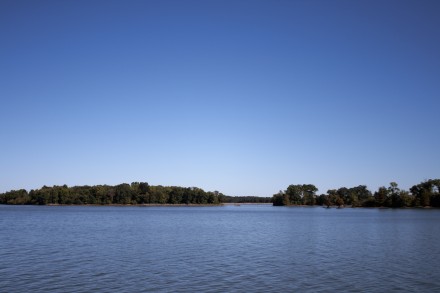 Evening at Densons Island, the end of a long hard day

After Densons Island, we moved on to the marina at Clifton, and then on to Diamond Island, and through Pickwick Lock to Aqua Yacht Harbour. 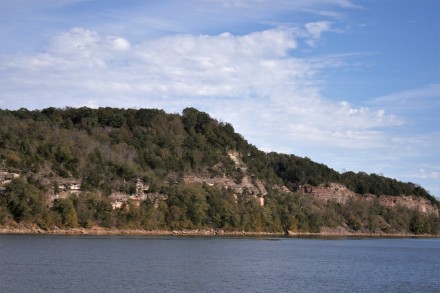 We had a couple of nights at Clifton Marina, borrowing the courtesy car, which was in reality a creaking pickup truck, to go to the small town to do laundry and reprovision. The only grocery store was Dollar General, which as the name implies, doesn’t strive to be high-end. Our previous experience of DG was that it sold masses of snack food, processed frozen food, hardware and not much else. So we were pleasantly surprised to find good quality fresh fruit and vegetables on offer, and the frozen salmon we got for dinner was fine. Apparently the stocking of fresh produce has only happened within the last few weeks, so I hope it continues.

On the second night two more boats joined us in the marina – Angela and Bob on Aqua Vision and Vicky and Bob on Virginia Hawkeye. We all went for dinner in the little bar in the marina and swapped stories of our various misfortunes. We’ve realised that conditions in the Mississippi and Ohio Rivers are much worse now than when we were there only 3 weeks ago, with water levels higher, and masses of impacted logs blocking the channel. Vicky regaled us with her account of setting off one morning in slightly misty weather, only for thick fog to descend, and getting completely confused and suddenly realising they were going upstream and not downstream. 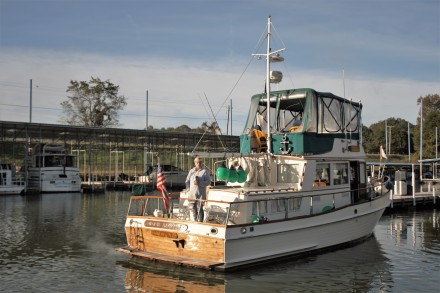 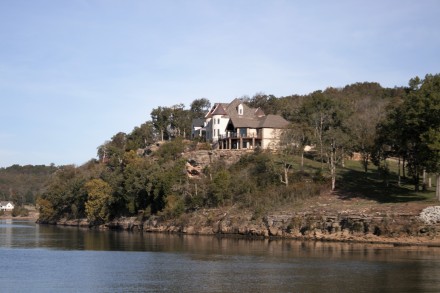 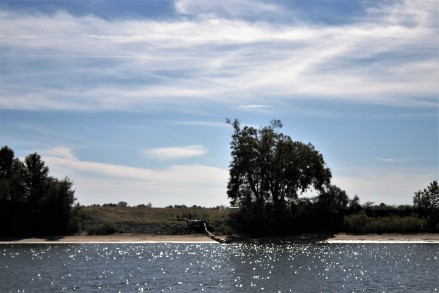 There was a little mist and fine drizzle as we left the anchorage at Diamond Island, but we rather optimistically assumed that things would brighten up. They didn’t. The rain and wind steadily increased and reached their high spot just as we had to negotiate Pickwick Lock, where the Tennessee River is dammed to form Pickwick Lake.  Ian always prefers to tie up on port, so I had put all the fenders out and was standing with my midline ready to lasso the bollard on the wall.

We approached the wall but not closely enough. In the corner of the lock we’d been directed to, there was a particularly strong wind blowing us away from the wall. I’m not very good at moving targets and my attempt at rope-throwing failed miserably. We reversed, and tried again. And again. This went on for a while, before the lockmaster suggested turning around and tying up to the opposite wall. This worked, as the wind was blowing us into the wall, but we then had the problem that we were facing the wrong way to get out of the lock. A 9-point turn didn’t go well so Ian ended up having to reverse Carina 300 yards out of the lock. Steering in reverse is difficult, but we made it eventually, but not before the crew, who had to stand on the back in the rain watching out, got very wet.

The waterway was first proposed in the late 1700s by French settlers, and engineering investigations were done in 1874. But the project was deemed impractical and although further studies were carried out at various times, it wasn’t until President Nixon finally approved it in 1971 that construction began in 1972. The Waterway was completed in 1985 at a cost of $1 billion. More earth had been moved than had been moved in the construction of the Panama Canal.

We got to Aqua Yacht Harbor, where we were given a covered slip, which meant we didn’t get too wet walking in the pouring rain to the restaurant for dinner. The next day, Glen, a local diver, came and removed the rope from the prop. It had been twisted several times round the prop and he had to cut it to get it off. There was no way that I could have done it, and that made me feel a bit better.