Political comment is normally outside the scope and objectives of this blog.

But the EU Referendum impacted on, and overshadowed, our return to the USA in a way that no other political event has. We’ve been here in the run-up to two Presidential Elections, in 2004 and 2008; we were here when Scotland decided to remain part of the United Kingdom (for then anyway) and we were here when, against expectations, the Tories were returned to power in May 2015.

On both of the two latter occasions we followed the news from home as best we could, with only intermittent access to the internet, feeling slightly dislocated from things and missing the immediacy and familiarity of  Radio 4’s Six o’clock news and the Today Programme.

The EU Referendum was something completely different.

We flew out on Thursday 23rd June, already aware that it was going to be close, but with a misplaced complacency that it would be alright on the night. Perhaps the woman  sitting opposite me in the departure lounge at Newcastle Airport, with her copy of The Sun, its headline screaming ‘Independence Day’ superimposed on a brilliant sun rising over Britain, was a portent, but I didn’t recognise her as one.

It wasn’t until we landed at Logan Airport, Boston, at 2am BST, and the lady at Customs said ‘Say, did your Bill get passed?’ that we had any inkling of the dramatic night we had missed. After we had established that she meant the Referendum, and that we had voted to Remain, she shook her head sympathetically. ‘I heard it’s real close. I’m so sorry for you guys.’

When we got to our hotel , our first actions were not to put the kettle on or start unpacking, or even ‘use the bathroom’, but frantically to tap the wifi code into the laptop to see what was going on.  Brexit had 51% and Remain had 49%, but with only 140 councils still to declare, it was clear that Remain were unlikely to make up the deficiency. An hour later it was all over and we went to bed dismayed, shocked and disbelieving, and fearful of the consequences of half the nation’s desire to ‘take their country back’.

There were one or two lighter moments. The US Border Force chaps will have their little joke, and after the usual pleasantries – purpose of visit, length of stay, where we lived in England, where our family lived in the US, names and ages of grandchildren, name and type of boat, where the boat had been stored, reason(s), if any, for naming the boat Carina – had been dealt with, it was down to business.

‘Ma’am, place the four fingers of your right hand on the pad.’

As the finger pad was almost at shoulder height, placing one’s thumb down vertically on it was comparable to a moderately difficult Pilates movement. I wondered how shorter people managed.

‘And now place the four fingers of your left hand on the pad.’

This apparently was a cunning trick, to elicit a smile for the camera.

The next day, we dragged ourselves away from the depressing news feeds and ventured into the city. As John Oliver pointed out, the Brexiteers’ exultation at gaining ‘independence’ was puzzling, given that not only was Britain already an independent country, but many countries celebrated their independence  from Britain. That we should be starting this trip in Boston,  the cradle of America’s independence from Britain , had a striking irony.

We did what everyone does in Boston, which was to follow the Freedom Trail from Boston Common, leading through the old streets past numerous historic buildings, over the Charles River to the Bunker Hill monument. The man who sold us the Guide to the Freedom Trail , on correctly identifying our accents, expressed his condolences too about Brexit. 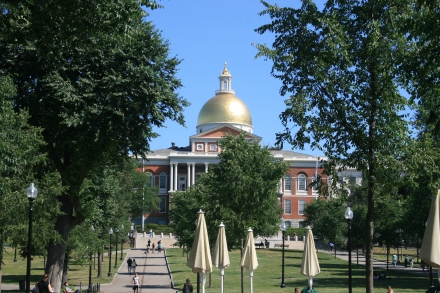 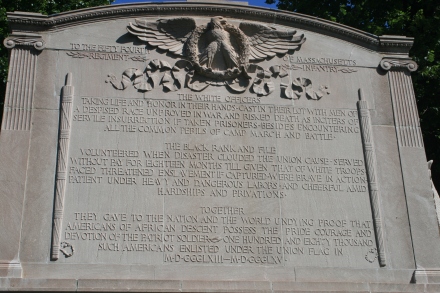 The 54th Regiment, led by Col Robert Gould Shaw, was the first in the US Army to allow blacks to enlist, to fight in the Civil War. They ran a particular risk if captured by Confederates, as did the white officers who led them, as they would be seen as traitors to their race. 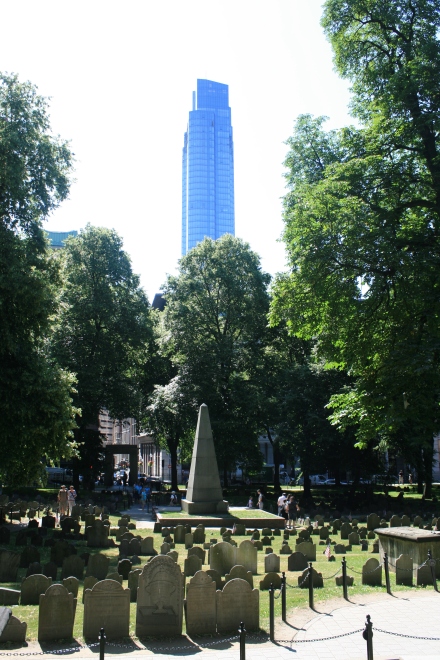 The Franklin Cenotaph in the Granary Burying Ground.

The monument commemorates the parents of Benjamin Franklin. Also buried here are many other Patriots of the Revolution – Paul Revere, James Otis, Samuel Adams, and the victims of the Boston Massacre of March 15, 1770. 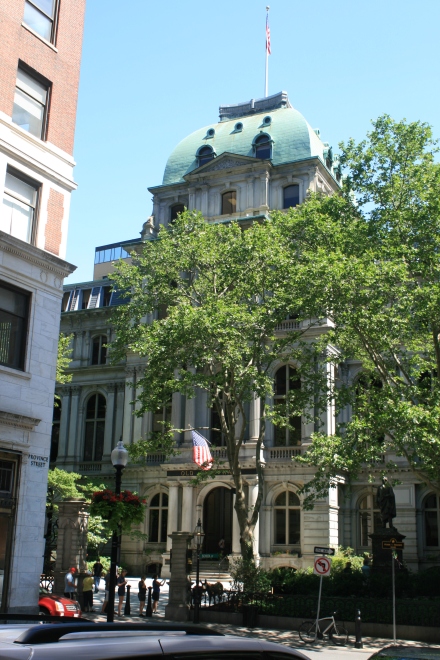 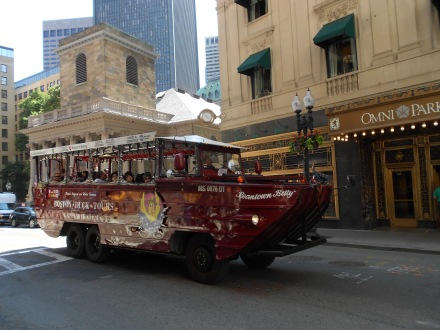 One of the famous Duck Tour buses –  a W.W.II style amphibious landing vehicle. 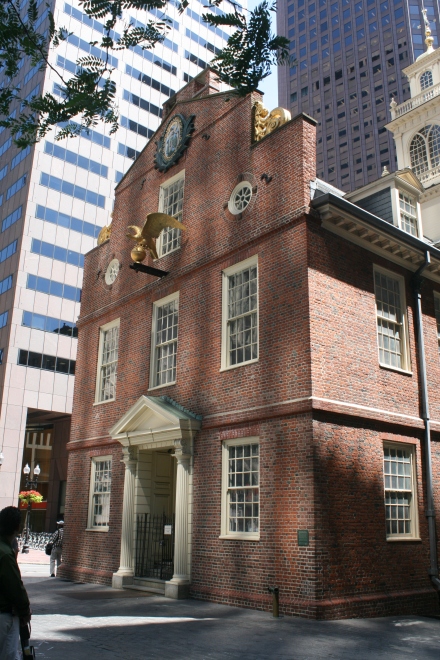 The oldest public building in the eastern United States, and the scene of confrontations between the royalist British Authorities and the freely elected Massachusetts Assembly. James Otis’ speech here in 1761 set the seeds of opposition to colonial rule by the British. 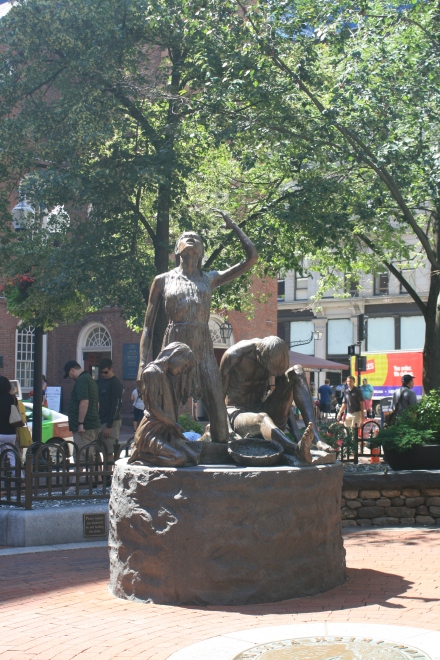 One of the statues commemorating the many victims of the Irish famine, who made the journey to a new life in America in the 1850s. 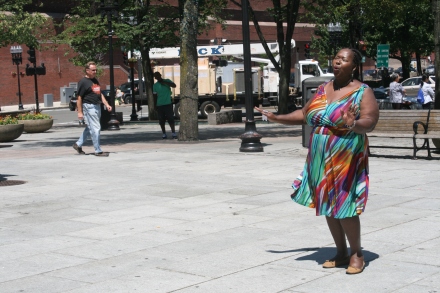 This lady had an amazing voice and was singing Gospel songs outside the Faneuil Hall. 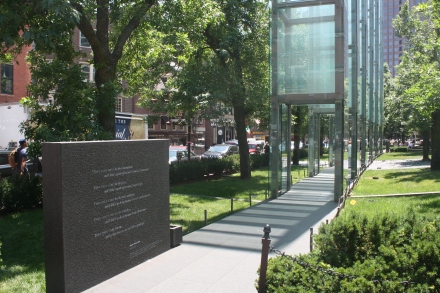 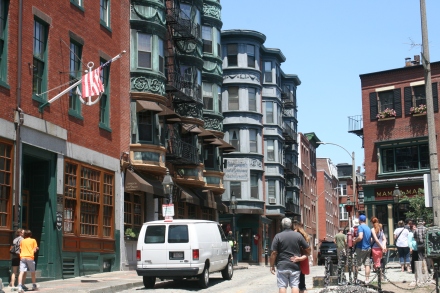 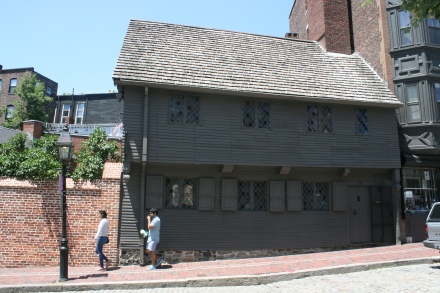 Just below North Square, this was the home of Paul Revere. Paul Revere’s midnight ride to Lexington on the evening of April 18, 1775,  to warn his fellow patriots Samuel Adams and John Hancock that British troops were marching to arrest them, was commemorated in a poem by Henry Wadsworth Longfellow. 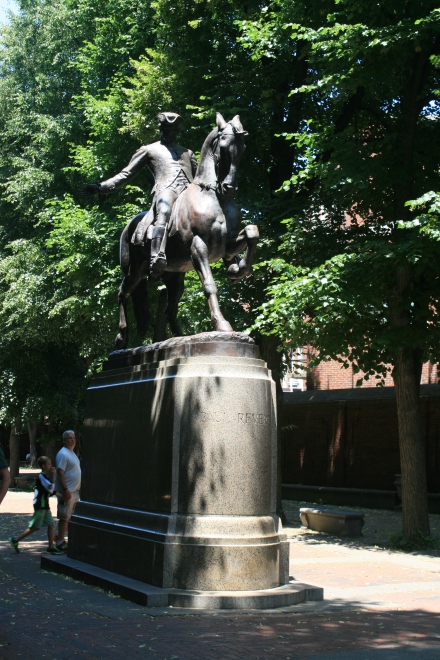 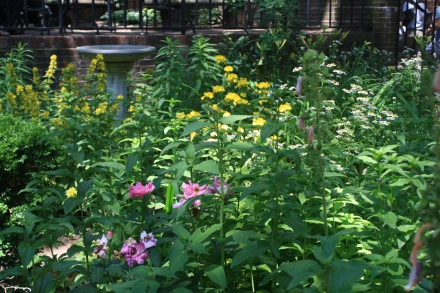 It was from this church that Paul Revere arranged to have a lantern signal shone to warn the patriots of the British troops’ march – ‘One if by land, Two if by sea’. 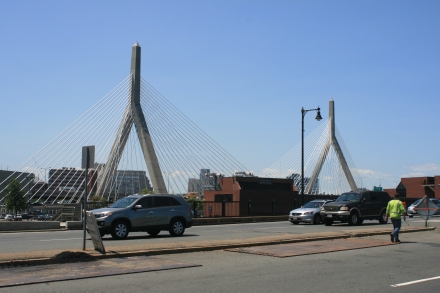 Another cable-stayed bridge, over the Charles River 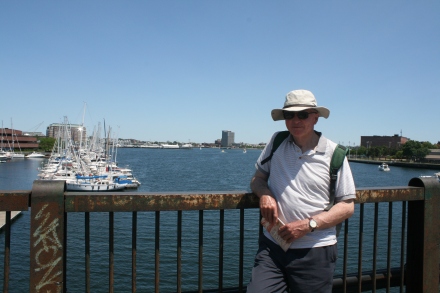 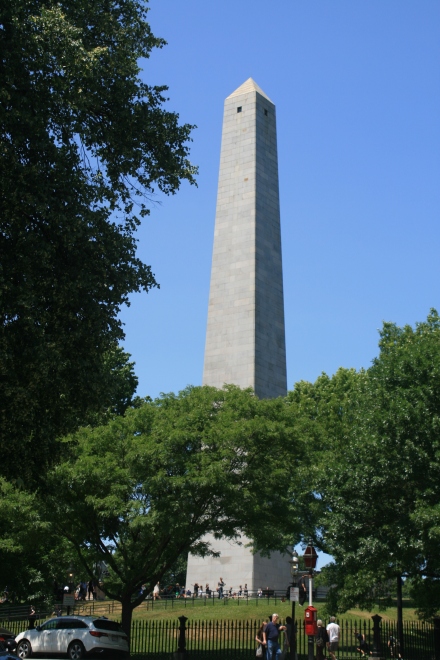 The site of the first battle of the Revolutionary War. 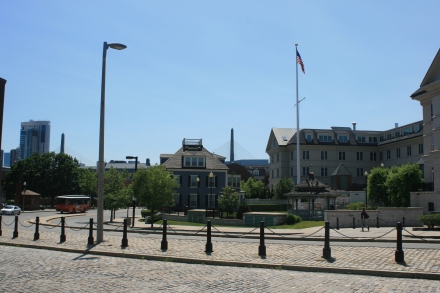 Near the Navy Yard

We finished up at the Navy dock where Old Ironsides, USS Constitution, America’s oldest battleship, is on display. She is undergoing repairs and refurbishment, so we missed seeing her in her glory.

The ferry took us back to the city, with some fabulous views.

From the ferry stop 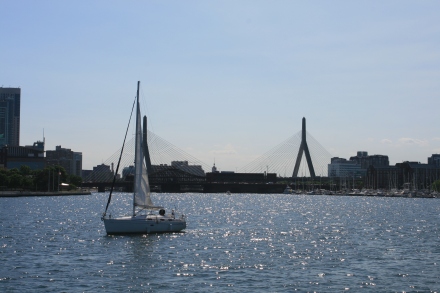 Tobin Bridge from the ferry 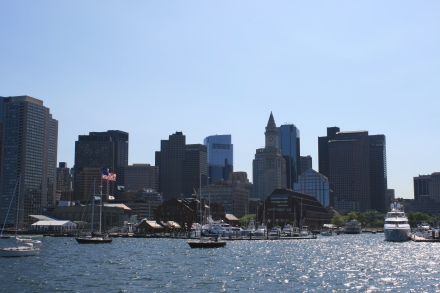 My attention had been drawn via Facebook  and our friend Jasmine, to Boston Swing Central. It transpired that not only did they have Swing dancing on Friday nights, but the dance was preceded by a group lesson. No previous experience necessary. I managed to convince Ian that this was an opportunity not to be missed, so in spite of our tiredness after the sight-seeing, we grabbed an early dinner at Olive Garden and set off from the hotel in South Boston, via the T (metro), and the no 78 bus,  and found our way to  Extreme Dancesport, 26 New St, Cambridge, the home of Boston Swing Central. The welcome was warm and the lesson unlike any other dancing lesson in our experience. But the enthusiasm of the teachers, the friendliness of the other dancers and the similarity of the Eastern Swing to some dances that we already knew, outweighed the panic felt at having to move  on round the circle and dance with other people you didn’t actually know.

Waiting at the bus stop on the way back, we became a bit concerned that we might have missed the last bus back. It seemed very quiet, but then a young man appeared and sat down in the bus shelter. Ian asked him if a bus was due, and he obligingly consulted his smartphone. He told us that he was an asset manager and he too was concerned about the impact of Brexit. He commiserated with us all the way to Park St on the T, where he was going to an open air concert and dance, along with most of the other young occupants of the train.

We drove out the following day to Gloucester on Massachusetts Bay, near the site of the first Puritan colony and had a good lunch at the Topside Grill, which had the cosy ambience of a British pub. 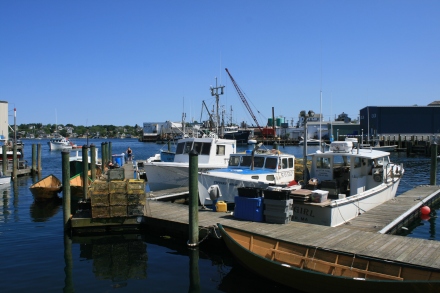 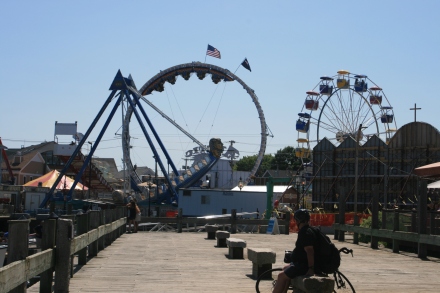 It was a fiesta weekend, and bloodcurdling screams emanated from the various terrifying rides. 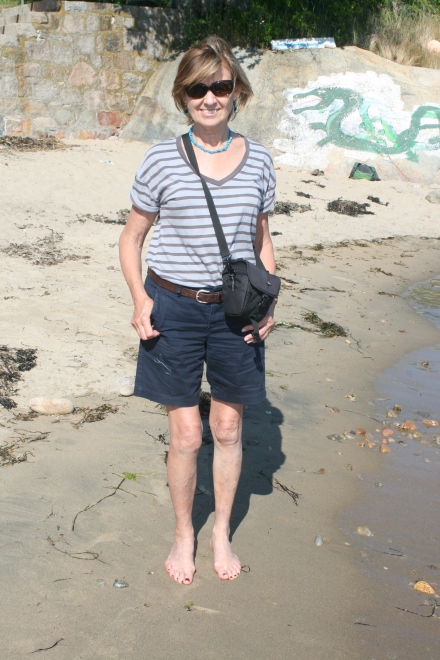 On the beach, Massachusetts Bay 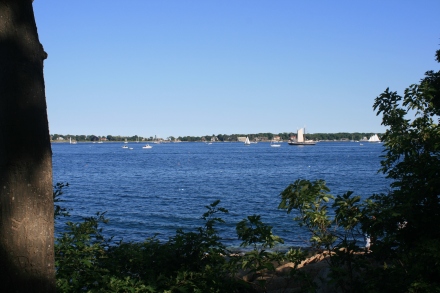 Looking back across the bay to Gloucester

In the evening, we  decided to be good Europeans and walk from the hotel to a nearby restaurant, the Cafe Polonia. It was simply furnished and served delicious, homely food, and  the young Polish girls who served us were far too polite to mention the B-word.

On the Sunday we drove to Albany via Hartford, Connecticut, and stopped to visit Elizabeth Park, which contains the oldest municipal Rose Garden in the USA. It was started in 1903  and has over 15,000 rose bushes and 800 varieties of old and new roses. 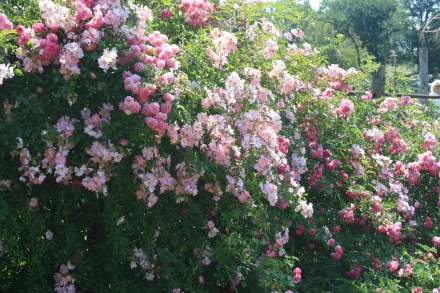 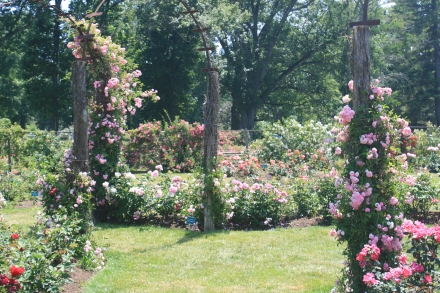 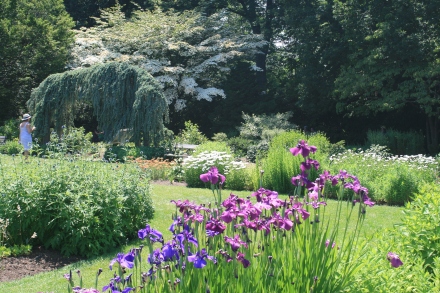 Blues and purples in the herbaceous beds 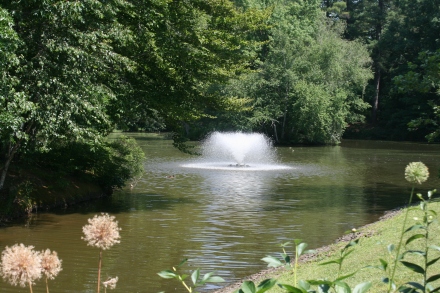 The following day, Monday 27th June, we drove to Coeymans Landing Marina, where Carina had been stored over the winter. The marina and workshop staff had done a  great job of looking after her and we began the tasks necessary before getting her on the water again.

Halfway through the morning, we got a text alerting us to the safe arrival of our new grandson, Finn Wyatt Ainsworth. And not even Brexit could overshadow the joy, excitement and thankfulness of that moment. 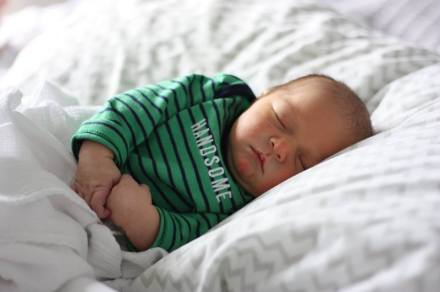