We left Ortega Landing at the appointed hour on Friday morning, despite the weather forecast, thinking that if it proved correct, we could cut the journey short, but although we could see the thunderstorms in the distance, they kept away and we managed 40 miles to Fernandina Beach, on Amelia Island.

We’d actually enjoyed the stay at Ortega Landing, and were rather sorry to go, after all. 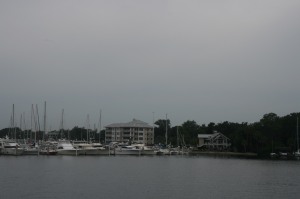 We were relieved to see that the FEC Railroad Bridge was indeed lifted, as promised. 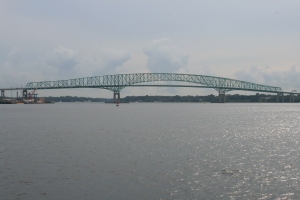 Another one for the Bridge Engineers

We had to cross Nassau Sound before heading up the Amelia River. We saw lots of wild life – several pods of dolphins, a flock of ibis, and best of all, a beautiful roseate spoonbill in flight, but I wasn’t quick enough with the camera.

Amelia Island has a long history and the old streets of Fernandina Beach are interesting and pleasant. We had time for a short stroll and indulged ourselves with cocktails.

Lesesne House, thought to be the oldest in Fernandina Beach

Ian is feeling rather pleased with himself today. When we arrived at the dock yesterday, he was congratulated enthusiastically on his deft handling of the boat in fairly windy conditions, by the two marina staff who were waiting to help us tie up. Thank you Melvyn, if you’re reading this!
Then this morning, as I was peering into a shop window, I heard a woman of a certain age exclaiming about the cuteness of his socks (subtle, grey and beige striped Marks & Spencer jobs), and had to adopt a proprietary air before moving the conversation to safer topics.
The real purpose of this morning’s trip to the shops was for Ian to visit the Amelia Island Paint and Hardware, Inc., such places having a magnetic pull as well as that smell, common to hardware shops everywhere.

I fancied a trip to the Pecan Roll Bakery too, just a couple of blocks away, and managed to spend $16 on a multi-grained loaf, a pecan roll (a bit like a danish pastry rolled up, but nicer), an oatmeal and date slice, and two corn-bread type cakes with cheese and egg and bacon inside them, to have for lunch with salad.

Carousel horses on a verandah 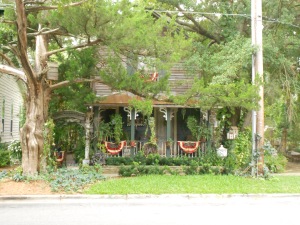 It started to rain while we were in the town, and we decided change our plan, which had been to leave this afternoon for St Mary’s, Georgia. Although there have been spells of semi-brightness when it felt as though we might have been wimping out, the wind became quite strong and the rain is now very heavy, so it was the right call.

And Ian has put the ice-making machine on, so tonight it will be cocktails on Carina.