Despite worries about lurking rocks just below the surface of Couchiching Lake, we arrived unscathed at the Town Dock in Orillia, to find a party in full swing next to our slip. Several boats had got together, put their deck chairs on the dock, and were eating and drinking the afternoon away to various kinds of very loud music. Apparently it was an annual event.

The music started off with Latin/reggae, and progressed to heavy rock. By early evening the boaters were dancing as well, and at some risk of falling into the dock. Their friendliness did not extend to actually inviting us to join in, and we escaped to explore Orillia’s fine dining scene at the Era 67 restaurant.  They were still partying when we got back.

The playlist had now degenerated to ‘Cheesiest Songs of the 1970s’, to which they sang along with enthusiasm. We were sitting in bed reading our kindles, having already had the YMCA song, Sweet Caroline, and Tie a Yellow Ribbon round the Old Oak Tree, when the rude version of Living with Alice came on. There’s a link here for anyone unfamiliar, as we were, with this version and who may be curious. Suddenly, at 10.30, the music stopped and everything went quiet. The silence was almost as disconcerting as the music had been.

We cycled a couple of miles down the lake shore to Old Brewery Bay to the Stephen Leacock Museum. Stephen Leacock came to Canada from Britain in 1875 at six years of age, and lived near Lake Simcoe. He became Professor of Economics and Political Science at McGill University, but he is best known for his fiction and humorous writings. He built the house at Old Brewery Bay in the style of the Arts and Crafts Movement and it was his summer retreat. 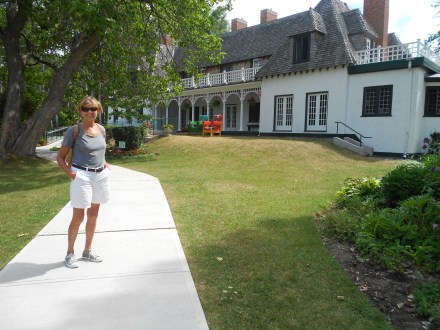 At the Stephen Leacock Museum

The day we picked up a hire car to do some shopping and to pick Liz and Nick up from Toronto airport was the wettest we’ve experienced since leaving Florida and reminiscent of the tropical storms in Hongkong. We got soaked just walking from the boat to the marina office, where Enterprise Car Hire were coming to pick us up.

The next day we had the whole gamut. It was cloudy as we left Orillia to travel north through  Couchiching Lake. By lunch time it was sunny, and by the time we anchored in Deep Bay at the north end of Sparrow Lake at about four o’clock, it was raining so heavily that Liz and I were trapped upstairs on the bridge, listening to the downpour and the thunder and watching the spikes of rain bounce off the lake.

Leaving Orillia with the new crew on board 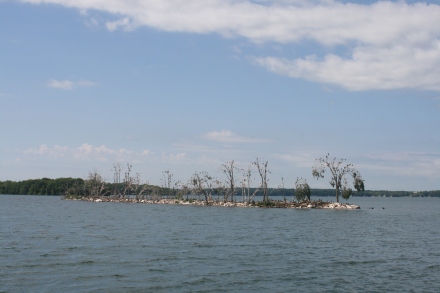 The cormorants had stripped all the vegetation on this island.

Nick at the helm

By 7 o’clock it had cleared enough to use the barbecue – an item of equipment we had inherited from the previous owners and which we had never got round to trying out. Nick’s expertise proved invaluable when after half an hour the charcoal was showing no signs of igniting successfully. Piling it up into a heap did the trick. 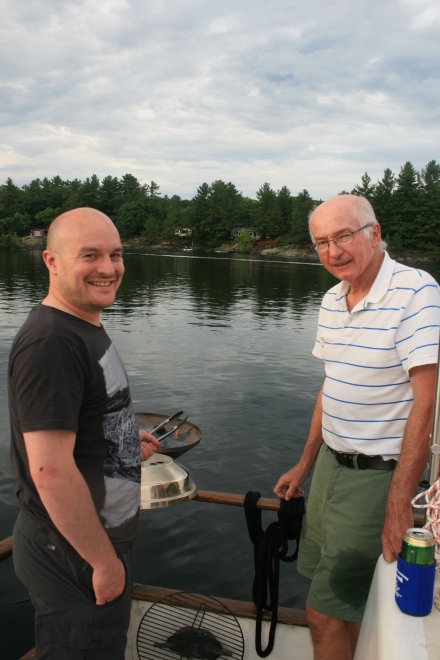 The next morning was misty and although it started to clear, the cloud persisted for most of the morning as we made our way to Big Chute, Lock 44. 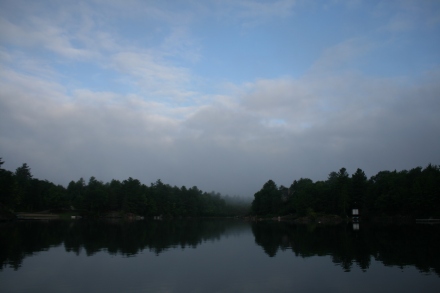 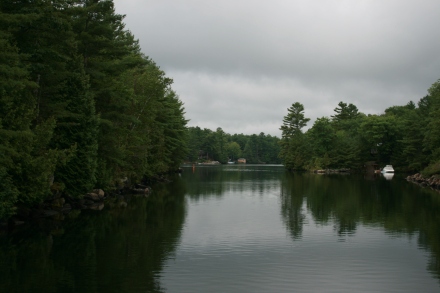 Big Chute is the most awesome thing on the waterway, and eagerly anticipated. It is not technically a lock, but a railway which transports boats up and down the rapids of the Severn River. It was originally constructed as a temporary measure, pending a proper lock being built. Construction of the definitive lock was  abandoned because of cost. Another reason for not progressing the project was that a lock would allow lamprey to move upstream and jeopardise the fisheries of Lake Simcoe.

Despite the steepness of the descent, the boats are maintained in a horizontal position by a cunning two-rail system which means that the front of the boat is supported and moves down independently of the back.

We stayed at Big Chute Marina at the top of the railway the night before we went through, so had time to have a look round and see what we were letting ourselves in for.

This boat has come up and is almost at the top of the lift…..

And a few seconds later is released from the cradle and is about to be lowered into the Severn River above Big Chute. 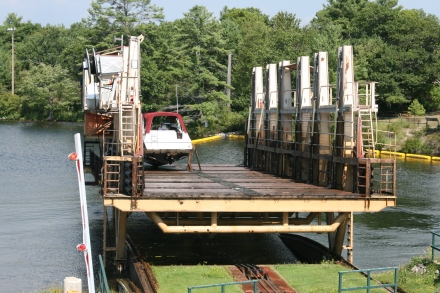 Being lowered into the water at the top

The railway about to go down to pick up more boats. 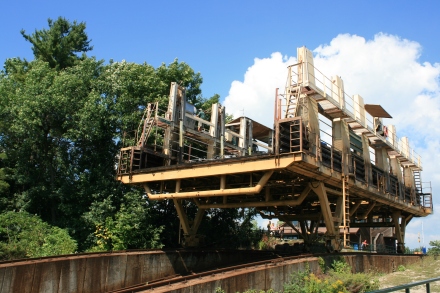 Big Chute about to descend

The spillway parallel to the railway 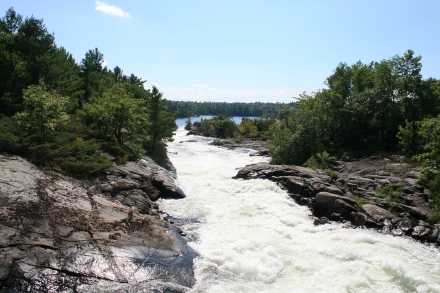 The spillway at Big Chute 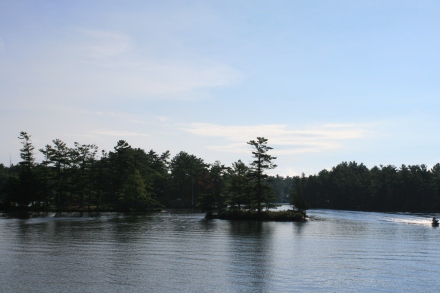 The next day it was our turn, and naturally the Captain was mildly anxious. There were prominent notices about Parks Canada not being responsible for damage to boats,  but the experienced park staff told us exactly what to do and Carina was soon settled in the cradle. There were some slightly alarming bumps, whirrings and crunching noises as we descended, but all went well and we were surprisingly quickly out into the pool below the rapids.

Carina in the cradle about to descend Big Chute

About to go down Big Chute – note dual track 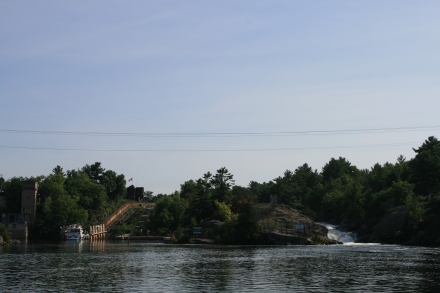 Immediately below Big Chute, we entered Little Chute Channel, a narrow, rocky pass with a strong current. The Captain had to call ahead on the VHF to advise upbound boats of our presence. Although as a downbound boat we had right of way, as the Waterway Guide put it, ‘Upbound boats may not know this, or act accordingly.’ But there weren’t any upbound boats and after the channel, we entered the lovely Gloucester Pool, with its many islands. 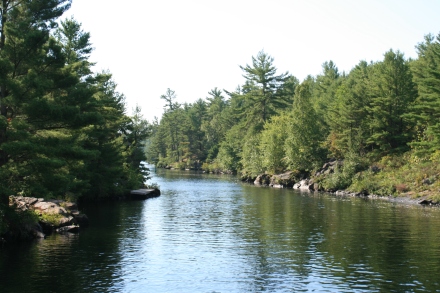 At the last lock, Port Severn, there was a great backlog of boats waiting to lock through. We had to hover about among lots of smaller craft, waiting for our turn to moor up on the lock wall to actually get in the queue. There was a man on the dock helping boaters with their lines.

‘I think you must be Jane.’

I agreed that I was.

I admitted this too.

‘And your surname is Ainsworth?’

This was beginning to feel spooky, so I decided to give him ‘the Look’.

‘I’m from the Canadian Secret Service,’ he informed me, which prompted me to ask who he really was.

He really was Barry Jones, who with his wife Alice meets and greets all the Looper boats going through Port Severn, and who had seen the blog in the early stages of our journey, and added very helpful comments about where we could store Carina in Canada over the winter. He had not only recognised Carina, but been alerted to our presence by the owners of the boat in front of us, whom we had met earlier. It was good to meet you Barry and Alice, if you are reading this!

Reaching Georgian Bay was another milestone. Occupying the northeastern part of Lake Huron, the bay is almost as big as Lake Ontario. The Georgian Bay Littoral, containing the 30,000 islands which festoon its northern shore, became a UNESCO Biosphere Reserve in 2004.  As well as its awe-inspiring beauty, the area is recognised as a tricky one to navigate and the weather can change very quickly, so we had to be prepared to accommodate this. 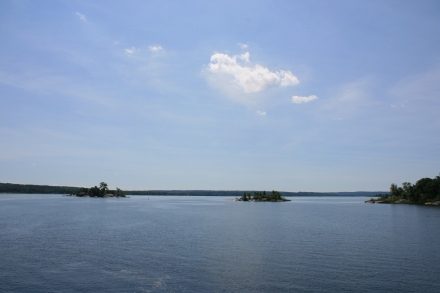 At this point the channel twisted and turned through the barely submerged rocks. 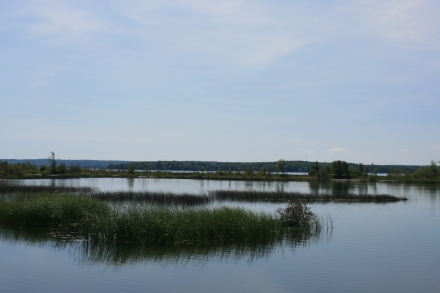 The forecast for the weekend was for stormy weather so we headed for the safe haven of Penetanguishene Town Dock. 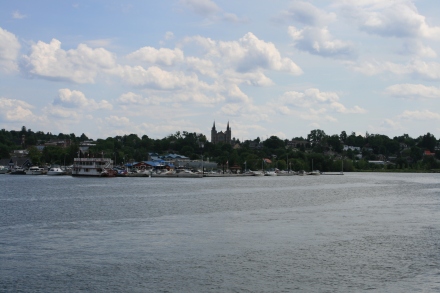 The day after our arrival, the winds were creating large waves in the harbour so we spent a couple of days sight-seeing. 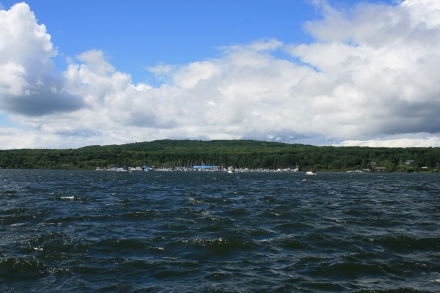 The area around Penetanguishene was first settled by the Wyandot (Wendat) First Nation around 800AD. The French explorer Samuel de Champlain arrived in 1615 and the area became a base for the fur and timber trades.

In 1793 following the American Revolutionary Wars, John Simcoe, the British Governor of Upper Canada, proposed a naval establishment at Penetanguishene to aid Canada’s defence. During the war of 1812 this became a reality, and even though in 1814 the Treaty of Ghent ended the hostilities between Britain and America, there was still perceived to be a need for a naval base. The British warships HMS Tecumseth and HMS Newash were maintained at the base so they could be deployed if needed. Later, the naval base was closed, but a military base established and maintained  until 1856, when war with America had become far less likely. By this time Penetanguishene had other industries, and a sufficiently large civilian population to survive the loss of the military base.

Discovery Harbour is a reconstruction of the base on its actual site and contains a replica of HMS Tecumseth and HMS Bee, as well as the wreck of the original, which was recovered from Penetanguishene Harbour in 1953.

Henry Wolsey Bayfield was a British naval officer became Admiralty Surveyor, and surveyed  much of the Great Lakes area. 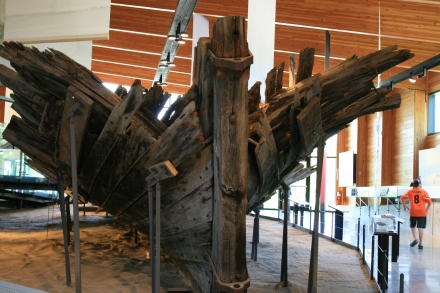 The Officers’ Quarters – the only remaining original building

The waterfront area next to the Town Dock was once once the hub of several industries, fur trading, timber and leather tanning. In the early 2000s the river levels receded to reveal lots of timber and other waste, relics of the industrial past. A project was started to remove the waste which was subsequently recycled into compost, and to restore the wetland ecology. The waterfront park, the Champlain-Wendat Rotary Park, aims to have one-third manicured lawn and flower borders, one -third wetland and one third wild flowers and vegetation. Sculptures and statues commemorate and honour the dual First Nation/French heritage of the town.

‘The Meeting’ was unveiled in 2015 to mark the 400th anniversary of Samuel de Champlain’s arrival in Huronia. It shows de Champlain with Aenon, a Huron-Wendat Chief. 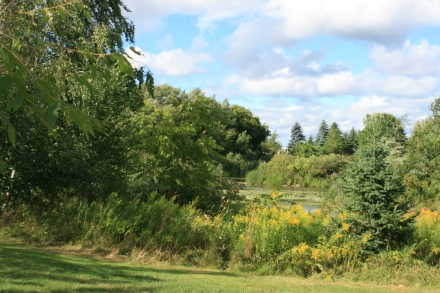 The strong winds stopped us leaving Penetanguishene but it gave us an opportunity to sample the local top restaurant, Le Maitre D. The maitre made us welcome in a courtly, French way and the food certainly lived up to the restaurant’s reputation.

The next day we able to leave for a side trip to Beausoleil Island, a few miles to the north just off the shores of Georgian Bay. Accessible only by boat, the whole island is managed by Parks Canada, with a couple of camping centres, some cabins which can be rented, and several docks where boats can tie up. There are walking trails over the island and walkers are advised not to stray from them because of bears and snakes. There was even a reassurance on the rubbish bins that they were bear-proof. We saw no bears, but the Captain did spot a small bright green snake.

We had time for a walk that afternoon, and another one the following day before we left Beausoleil for Midland, where Liz and Nick were picking up a hire car to to go back to Toronto. 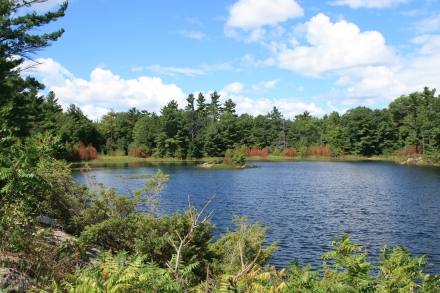 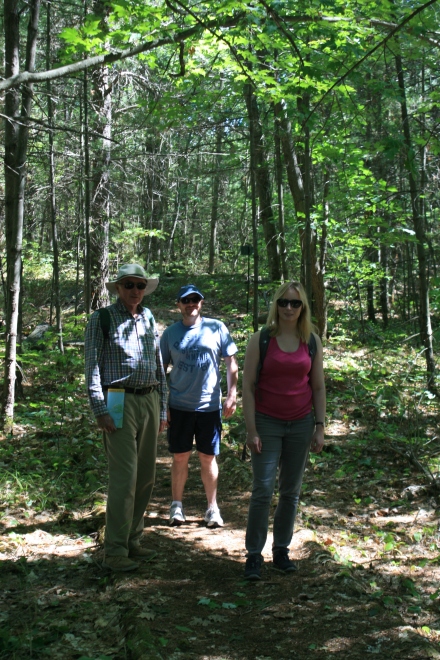 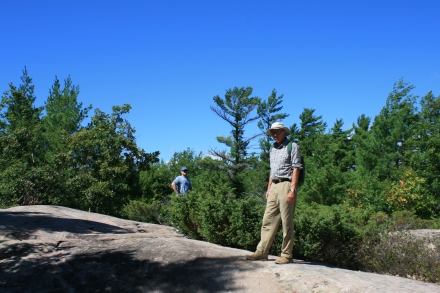 There were lots of outcrops of pink granite. 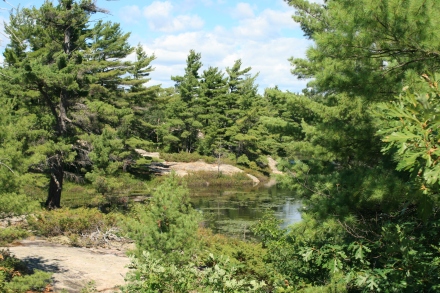 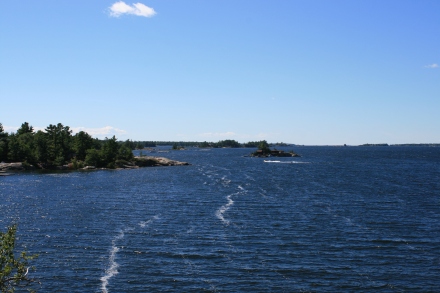 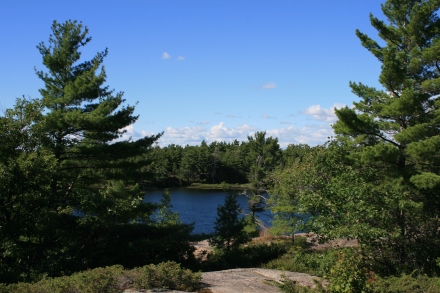 One thought on “Orillia to Midland, Georgian Bay”