After the glorious day we had travelling up the coast and into New York, it seemed inappropriately English to wake up the next day to drizzle and mist, which lasted the entire two days we were at Great Kills on Staten Island. It would have been disappointing if it hadn’t been our third visit to NYC, but we soldiered on and took the express bus into Manhattan regardless of the miserable weather.

But thanks to Google maps and my iPhone, I knew exactly where we were as we crossed the Verrazano Bridge into Brooklyn, through the tunnel and out into Lower Manhattan, so it felt like a guided tour.

We decided on the Museum of Modern Art, which had been closed for renovation when we came here in 2004, and just about to close for the day in 2012. Quite apart from the building itself, there was so much to see but we concentrated on the Impressionists, Cezanne, Gauguin and Seurat, followed by Picasso, Klimt and Braque.

This is Klimt’s portait of Adele Bloch-Bauer, the wife of a prominent Vienna industrialist. The painting was taken by the Nazis in 1938, and only returned to the family heirs in 2006. It is on loan to MoMA from the present owner. 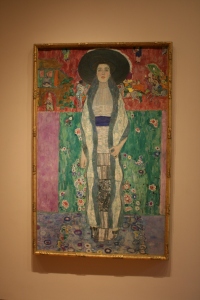 We  liked the exhibition of photographs by Grete Stern and her husband Horacio Coppola, whose photographs of London in the 30’s were interesting and evocative.

There was also an exhibition of The Migration of the Negro by Jacob Lawrence, painted in 1940-41 and chronicling the migration of African Americans from the Southern States to the North, after emancipation at the end of the Civil War, in search of work.

On the way back, we managed to get on the wrong bus for Great Kills, but the driver very kindly took us there anyway.

On the second day we started off with lunch at the Chelsea Deli and Bakery on the corner of W23rd St and 8th Avenue. 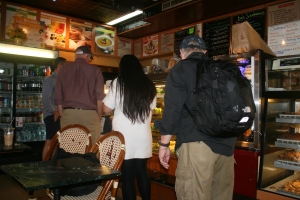 We wandered down W 23rd St towards the High Line, a linear park built along the track of a disused railway. 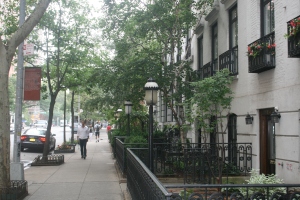 The High Line runs up to W34th St and is an imaginative use of a derelict site, bringing a green space to the crowded city and a new perspective.

W23rd St from the High Line 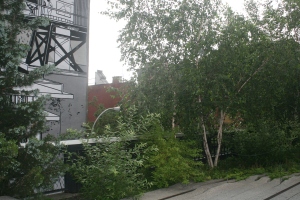 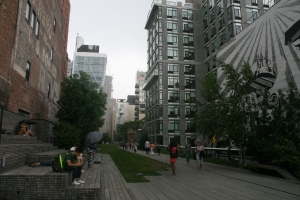 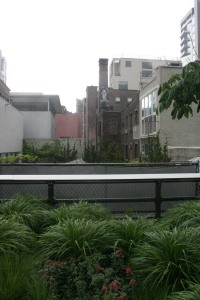 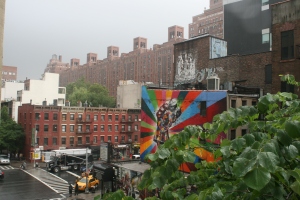 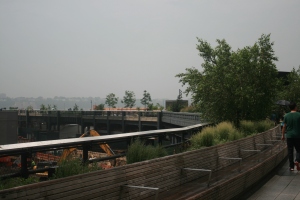 We turned back up W34th St and had a quick visit to Macy’s. 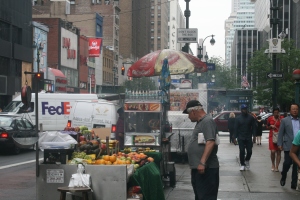 Back in the peaceful evening at Great Kills YC

We were feeling quite confident about the journey from Staten Island to Croton-on-Hudson, 20 miles north of New York, on the east bank of the Hudson River. The forecast was waves of  one foot, wind speeds around 10 knots, both well within Carina’s, and our, capabilities.

The actualite was rather different. By the time we drew level with the Statue of Liberty, the waves were more like 3 feet, and the wind was gusting 30 knots. There was no turning back.

We weren’t sure whether the weather forecast had been wrong, or it was the local effects of the tides, the wakes caused by the many large and small ferry boats, and  the wind funnelling round the tall buildings. But I had gone down from the bridge to take photographs from the foredeck, and found myself trapped there, hanging on to the anchor post, unable to get back up to the bridge, while Carina pitched and tossed her way past Battery Park. 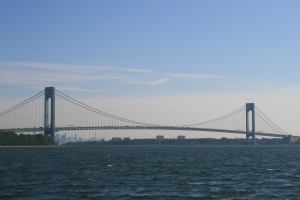 The Verrazano Bridge between Staten Island and Brooklyn 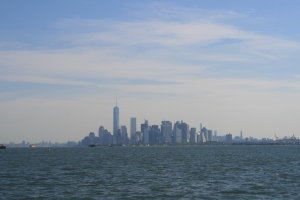 Lower Manhattan all pink and grey in the early morning 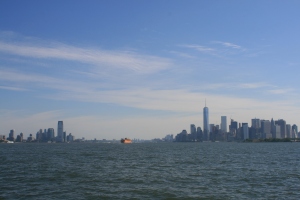 Ellis Island, the gateway to America for millions. 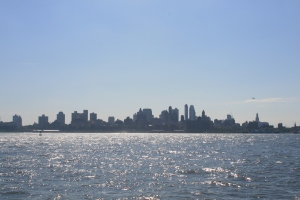 Jersey City from the Hudson River 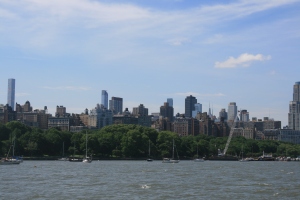 Once we were properly into the Hudson River, things calmed down and perhaps because the immediate stress and danger was passed, the dramamine I’d taken as a precaution against motion sickness kicked in and I slept for the next two hours, waking up only half an hour before we got to Half Moon Bay Marina, where we were staying at Croton. We were consoled to find some other ‘Loopers’ there who had also made the trip from Great Kills that day, who had found the journey just as surprisingly difficult as we had.

The next day we hired a car to drive over to Bronxville, a lovely small town set in wooded hills just north of New York City, to meet my cousin Pat and her daughter Anne. Pat and I hadn’t seen each other for nearly 60 years, and seeing her again and meeting Anne for the first time was just the best thing. 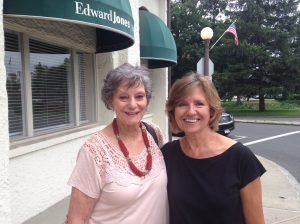 Sunset at Half Moon Bay

Steve, the marina manager at Half Moon Bay, told us there was a Folk and Blues Festival on at the weekend, so we decided to extend our stay to four nights.

We kept the car an extra day so we could see a bit more of the surrounding area.

We went to Kykuit, completed in 1913, and home to four generations of the Rockefeller family. Perhaps more interesting than the house itself was the background information about the philosophy, attitudes and values of the first two generations of Rockefellers. They didn’t believe in unnecessary expense, so none of pieces of furniture were genuine antiques, but reproductions. There was no alcohol in the house, no dancing, and no playing cards. 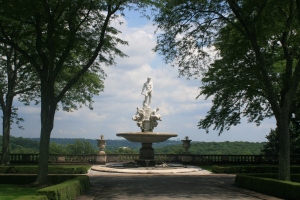 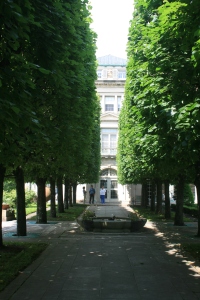 Pleached limes leading up to the house

This changed over the years, especially after  John D Rockefeller Jr married Abby Aldrich. He didn’t like modern art, so they had to buy a house on W54th St in Manhattan to house her collection, and this was subsequently gifted to the nation and was the basis for MoMA.

The garden though was splendid. Designed mainly by Frederick Law Olmsted, it takes full advantage of Kykuit’s position 500 feet above sea level and overlooking the Hudson Valley. The garden immediately round the house is divided into a series of ‘rooms’. 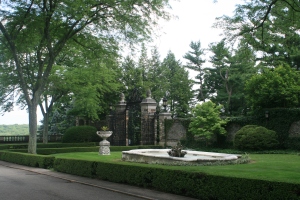 Near the main entrance 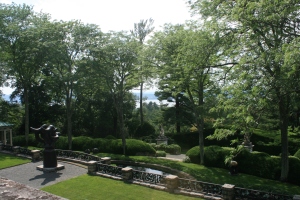 The photo below shows the hedges trimmed to a wave form to mirror the natural landscape.

We had seen a small Olmsted garden on the Jacksonville waterfront, but this was on a grand scale.

To balance things up a bit, the next day we went to Fort Montgomery, a few miles further north on the west bank of the river. It was the scene of a bloody battle in the Revolutionary War when the attack by the British on Fort Montgomery and the neighbouring Fort Clinton was intended to  divert American forces away from the British General John Burgoyne’s attempts to gain control of the Hudson River. The victory though was too late for Burgoyne, and he surrendered a week later. 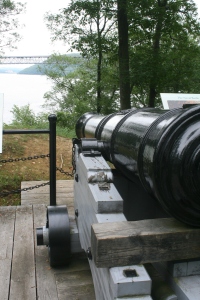 Although thunderstorms had been forecast, Sunday was sunny and hot, and we had a fantastic day at the Clearwater Festival. Clearwater had been started in the 60s by Pete Seeger, with the aim of raising awareness about the pollution and destruction of the Hudson River, and putting pressure on General Electric to reverse the damage done over the decades. This has been effective and the river is now much cleaner.

Their mission now is to ‘preserve and protect the Hudson River and its communities, and to inspire, educate, and activate the next generation of environmental leaders’. 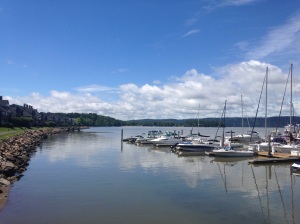 Looking towards the Festival site from the marina

As might be expected, there was a very Green vibe, with all rubbish being put into separate recycling bins, lots of craft stalls, and the food on sale was organic, healthy and delicious.

But best of all of course was the music and we saw a wide range, starting off with Tom Paxton & friends, and then the Blind Boys of Alabama. One of the venues had a dance floor, where we saw Orquestra SCC (Salsa dura), Dustbowl Revival (Americana, Bluegrass, Swing and Gospel), and C.J. Chenier and the Red Hot Louisiana Band (Zydeco), so we managed some dancing too.

Some of the audience for Toshi Reagon & Big Lovely

We left Half Moon Bay the next day. Steve had been a great host, helping us to make a difficult dock when we arrived in windy conditions, supplying lots of useful information, and taking us in his car to the Festival.

The Captain’s latest acquisition has been a pennant holder for the front of the boat, so we set off up the Hudson River with Carina proudly displaying the flag of the American Great Loop Cruisers’ Association.