We arrived at Osprey Landing, Myrtle Beach, via the beautiful Waccamaw River. 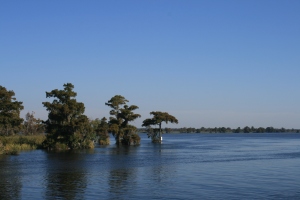 Autumn tints on the Waccamaw River

Myrtle Beach is a fun place. There’s fun of all kinds  – shopping malls, restaurants, fast food outlets, bars, clubs, a theatre, amusement arcades, crazy golf courses, and children’s playparks in abundance. We had a quick trip to the beach, but it wasn’t quite Cumberland Island. 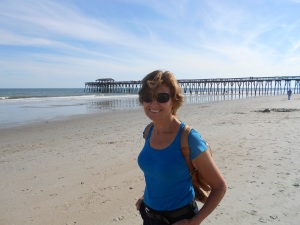 Above Osprey Landing, the waterway is a long straight canal with development on both sides, called Pine Island Cut, that lasts for nearly twenty miles to the border with North Carolina.

We stopped at Barefoot Landing, North Myrtle Beach, because there was one attraction that had proved irresistible. I can’t really do better than to quote the Lonely Planet:

“Fat Harold’s Beach Club: It’s a gas to watch the graying beach bums groove to doo-wop and old-time rock and roll at this North Myrtle institution, which calls itself ‘Home of the Shag’. The dance, that is. Free shag lessons are offered at 7pm every Tuesday.”

Unfortunately we were there on Friday night, so apart from one or two jives,  had to content ourselves with drinking our beer and watching the experienced dancers, some of whom were very good indeed.

It was immediately obvious that the term ‘beach bum’ had a different meaning in South Carolina from that listed in the Urban Dictionary. As we arrived, the DJ was playing a special song for a couple celebrating their Golden Wedding, and our fellow groovers, who ranged in age from 40-something to 80-something, were casually but smartly dressed, and apart from one ponytail, and one Bill Clinton look-alike, looked just like the sort of people you see dancing anywhere in the UK.

I had an anxious moment when, during Ian’s absence in the restroom, a gentleman asked me if I knew how to do the Carolina Shag, and it was a relief to be able to reply honestly that I didn’t. But we did have an interesting chat about similarities between the Shag, Eastern Swing, Jive and Cha Cha, and he told us about a big Shag Festival every Spring and Fall. Here’s a link to a video of the Junior Shag Competition.

After we left, and were waiting for our taxi, Ian noticed the Shaggers Hall of Fame stars on the pavement. 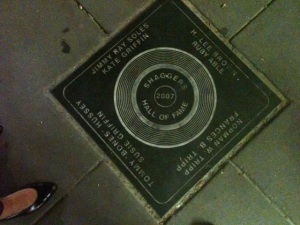 After the excitement of Fat Harold’s on a Friday night, boating seemed a bit mundane. We continued up the rather monotonous stretch of Pine Island Cut, then the waterway opened out just before the State Line.

Near the State Line

It was a Saturday, and we’ve got used to the noise and speed. 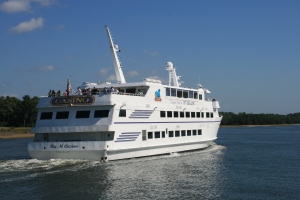 We had glimpses of the ocean at Shallotte Inlet. 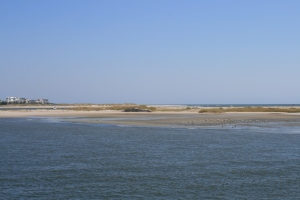 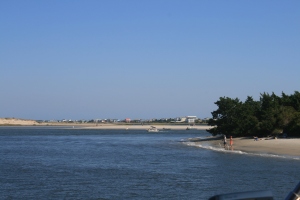 We stopped overnight at Southport, another old settlement with some lovely houses.

But the weather turned cool and cloudy, and as we left Southport the next day to head up the Cape Fear River, the wind was blowing one way and the tide pulling in the opposite direction, resulting in some quite heavy chop.

Things calmed down as we turned east along the cut leading towards Carolina Beach and our anchorage at Wrightsville Beach, but the sun stayed resolutely hidden all day.

Arriving at Wrightsville Beach in the gloom

The following day it was brighter, with blue sky over the Atlantic. As the waterway took a sharp right turn, Wrightsville Bascule Bridge, which the Captain had failed to notice when plotting the course the previous day, loomed ahead, looking very low. The sign next to the bridge indicated that it would only open on the hour. The chart claimed that the height of the bridge was 20′, which should have given us a clearance of 3′, but it didn’t look like that from where we were sitting.  However, as there was another 40 minutes to wait before the next opening, we circled round, weighed it up again and ploughed on. 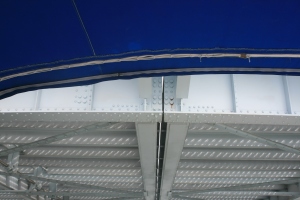 Aaaagh! The bridge visible just above the bimini

Not nearly so dramatic, but it reminded me of the time we arrived in New York on the QM2 in pitch darkness, and the Captain (the QM2’s Captain, that is) guided the huge ship under the Verrazano Suspension Bridge with two feet to spare.

We followed the waterway north eastwards towards Hampstead, with dense woodland to our left. To our right, the marshes, criss-crossed with creeks, stretched to the dunes and breakers of the ocean. 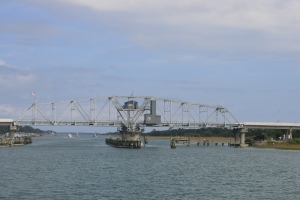 We had come to North Carolina six years ago, and stayed in this area.We’d looked at the waterway with interest, as at the time we had a share in a narrowboat and enjoyed the waterways at home. We never imagined then, that only a few years later, we’d return to the Intra-coastal Waterway in our own boat.

We moored at Harbor Village Marina, Hampstead and decided to hire a car and have a look round the area.

Wilmington, at the mouth of the Cape Fear River, and at one time the State Capital, was described as a hidden gem. It was also the home of USS North Carolina
After a good lunch of pulled pork and locally brewed beer at the Front St Brewery, we drove over the river to the Battleship Memorial.
USS North Carolina saw valiant service in WW2 and earned 15 battle stars, more than any other battleship. Although the technical aspects of the ship, and the scale of it, were very impressive, what made the exhibition so outstanding, and so moving, was the insight it gave into the sailors’ daily lives, and how they had responded under duress. The USS North Carolina was torpedoed on September 15th, 1942, with the loss of five men. The personal accounts of that day were harrowing.
The ship was decommissioned in 1947 and 10 years later, the US government announced that the ship would be sold for scrap. North Carolina school children raised $330,000 to save the ship and bring her home to North Carolina, as a memorial to North Carolinians from all the services who were killed in WW2. 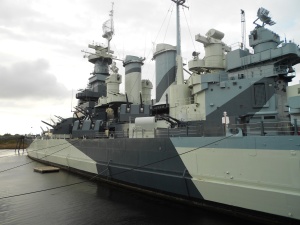 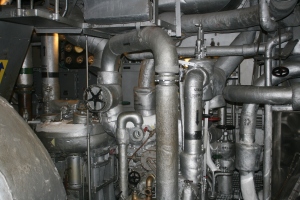 Part of the Engine Room 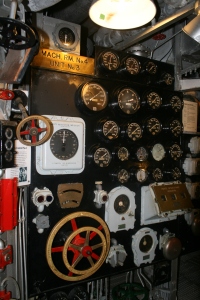 View from the bridge

Afterwards, we drove round the historic district, following the African-American Heritage Trail. One of the houses listed was the Hubert Eaton House, a modest single-storey dwelling on Orange Street. Hubert Eaton was a doctor  and a good tennis player, who adopted the young Althea Gibson and coached her on the court in his back garden, before her victories in the Women’s Singles at Wimbledon in 1957 and 1958. Somehow though, it seemed a bit of an intrusion to photograph the little house, very obviously someone’s home, and for a tennis fan, it was enough to have been there.

8 thoughts on “A Beach Club and a Battleship”