Almost as soon as we had left St Augustine, it felt as though we were on the way home.
Our first anchorage was at Pine Island, a beautiful, remote spot. The clouds looked as though they had been painted onto the sky. 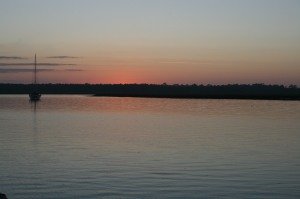 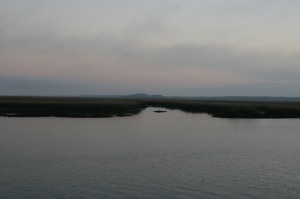 We had a few days to get to Green Cove Springs on the St John River, 30 miles south of Jacksonville, where Carina is going to be stored over the summer. But first we passed north along the Tolomato River, and then through a narrower canal, before docking at Sisters Creek, at the mouth of the river.

The canal stretch north of the Tolomato River

View from the dock at Sisters Creek

But the next few days were a bit grim. We woke up on Tuesday morning to find the temperature had dropped, it was misty, cold and windy, and we decided to stay put for the day, even though there were no shops within walking distance and it meant scraping round the cupboards for something for dinner. Even the egrets weren’t very happy. 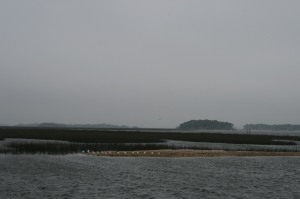 The weather failed to improve, and after a cold wet journey on Wednesday, we had no choice on Thursday but to move 20 miles up the St John River from Ortega Landing to Green Cove Springs, as we had booked an engine service there on Friday. The river is about 4 miles wide on this stretch, and we couldn’t see the opposite bank, so we were navigating on instruments in 25 knot winds, heavy rain and heavy chop. Fortunately everyone else appeared to have had more sense, so there weren’t any other boats about. Emergency doses of stugeron were needed to counteract the effects of Carina’s violent rolling, and I found Ian’s ‘Of couse it’s not going to bloody capsize. It’s got a bloody great iron keel on it!’ quickly followed by ‘Even if it tipped over by 90 degrees, it’d still pop up again!’ less than reassuring.

But we got there, and on Saturday the sun came out, so by the time we had packed everything away it was all nicely dried out, and we’ve even had some time to do a little sight-seeing. We couldn’t resist a last look at the ocean, so we drove over to the beach at Guana River State Park. We’ve now seen several places on Florida’s east coast which claim an association with Juan Ponce de Leon, and in the park the spot is marked where, at 30degrees 8’N, he sighted La Florida for the first time. 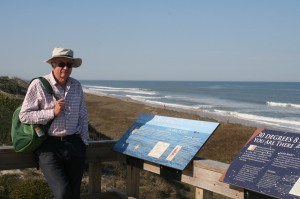 The spot where Juan Ponce de Leon sighted Florida in 1513

We had another view of the Tolomato River. 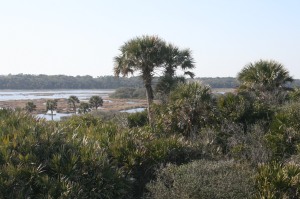 Tolomato River, from the Atlantic shore

This afternoon, with Carina safely out of the water and covered with tarpaulins, we had a quick look at downtown Jacksonville.

We have met with universal courtesy, kindness and friendliness while we have been in Florida, but even though I now remember to ask if there is a restroom, and to specify that I would like milk with my hot tea, it’s probably inevitable that I still feel like a foreigner, and sometimes acutely so.
Last night we went for dinner at Joey Mozzarella’s (‘We let our food do the talkin’), Tripadvisor’s number one recommendation for Orange Park, where we’re staying. It’s a diner rather than a restaurant, and we discovered too late that if you want wine, it’s BYO.
But it’s sufficiently authentic to assume that the customers don’t need explanations of the various dishes on the menu, so when Joey himself, a small, thin, Italian-looking chap came over to check us out, I had no hesitation in asking him what Fettuccine Alfreddo consisted of.
He looked at me in stupefied amazement for several seconds.
‘You don’t know what alfreddo is?’
He walked off round the room, looking up at the ceiling, before returning to our table.
‘Are you serious? You’re really asking me what alfreddo is? What state you from?’
‘Er…..Britain,’ I replied uncertainly, feeling by this time that I had chanced upon Orange Park’s answer to Basil Fawlty.
‘Britain? Britain?’ He was momentarily mollified, but then looked at me with renewed suspicion.
‘But you must have alfreddo, even in Britain!’
I pleaded advancing years, and a failing memory.

But it was just Joey’s way, and when the Chicken Alfreddo came, it was very good indeed.

Tomorrow we have to be in Orlando at 5 o’clock to check in for our flight home, and the plan is to indulge ourselves with breakfast at IHOP, then go by the scenic route via Ocala National Forest to Orlando.
We’ll be returning in September to take Carina up to Chesapeake Bay, and it will be good to come back, knowing Carina, and perhaps feeling a little less foreign.