North of Wabasso, the waterway is very pretty, with numerous small islands as well as the longer barrier islands to the east.

The Intracoastal Waterway near Sebastian Inlet

We’ve seen a number of dolphins, but this is the first photo I’ve managed.

But attractive though it was, I wanted to see the ocean on the other side of the islands. There was a possibility of mooring at Sebastian Inlet marina, from where we could have walked to the beach, but we had inconveniently used up all our wifi and the only way to get some more was to take a trip to the dreaded Walmart.
This in turn meant a marina from where we could at least get a taxi, so we carried on 10 miles north of the inlet to Melbourne and stayed at the marina there.

Perhaps it’s because I’ve lived in Northumberland for nearly 30 years, or maybe all the holidays in Cornwall, but I still really wanted to see the proper sea, as opposed to the river inlet which we’ll be on for the next 200 miles.
You can’t really wander at will in the US, it seems, and probably you wouldn’t want to, given some of the wildlife. You have to see the wild places through the State Parks, and after a protracted discussion, it was agreed to suspend fiscal caution, stay another night in the marina, and hire a car for a day which would not only facilitate the shopping in the afternoon, but would allow us to drive 10 miles back down the island to Sebastian Inlet State Park

It was the right call. The ocean was awesome. We looked at the beach, and the birds, and Ian had a chat with some people who were fishing on the pier.

First view of the Atlantic at Sebastian inlet 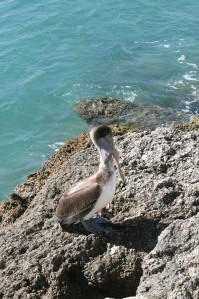 I think this is a Caspian Tern. He certainly didn’t mind having his photo taken.

This one’s for any Newcastle supporters who may be reading this.

We decided to walk along a 5km trail that would take us round the river shore and back across the island to the ocean shore. A nice Park Ranger advised us that we couldn’t possibly get lost, and insisted on giving us his insect repellent when we said we hadn’t got any.
He added a note of caution. ‘If you see an alligator on the path, don’t try to go past him. Just turn around and go a different way.’ You bet.
But apart from a few tantalising rustles and splashes, the wildlife were having a quiet day.

This is the river shore at the start of the walk. 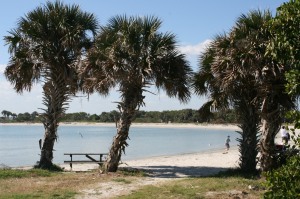 The cove on the river shore, Sebastian Inlet 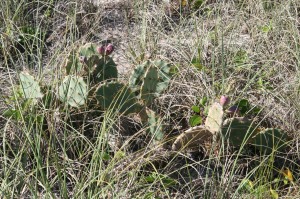 The trail went along the top of a man-made dyke which had been put in to help prevent hurricane damage, but even so, the views were very limited because of the dense mangrove. 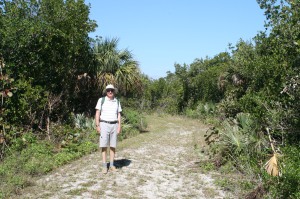 walking along the trail near the river shore

There was a very occasional break in the vegetation. 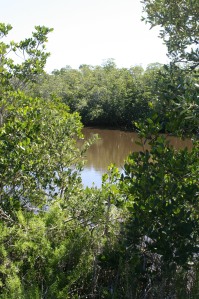 A brief glimpse of the river shore through the mangrove

As we turned back away from the river, taller trees on the slightly higher ground formed a hammock. 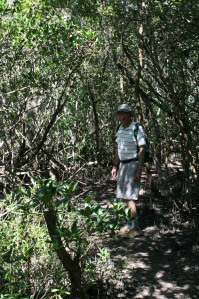 We had another 2 km to walk back along the ocean shore. I think this is an agave, but I’m not sure. It seemed to be an escapee from the garden of one of the very few houses in the vicinity. 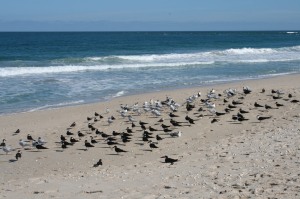 Back on the Atlantic shore 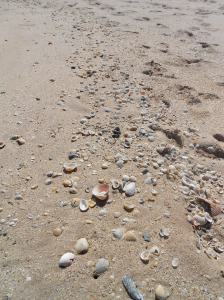 shells on the beach 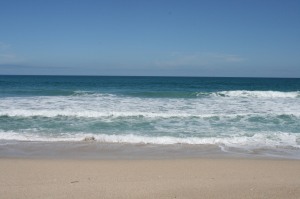 Today we’ve travelled another 30 miles north and are moored close to Cape Canaveral, where a rocket is due to be launched in just under two hours’ time. There’s a fair bit of chop, so we are rocking and rolling a little, but we’re looking forward to seeing the action.